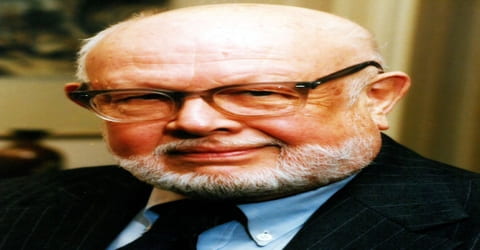 An American nuclear astrophysicist who, with Subrahmanyan Chandrasekhar, won the Nobel Prize for Physics in 1983 for his role in formulating a widely accepted theory of element generation, was born on August 9, 1911, in Pittsburgh, Pennsylvania, U.S. and the eldest of John and Jennie Watson Fowler’s three children. He is known for his theoretical and experimental research into nuclear reactions within stars and the energy elements produced in the process. He is best known for his explanation of how chemical elements are built up (from heavier to lighter) within stars as they evolve. He developed these ideas (published 1957) while working with three British astronomers: Fred Hoyle, and Geoffrey and Margaret Burbidge.

Fowler won the Nobel Prize for his theoretical and experimental studies of the nuclear reactions of importance in the formation of the chemical elements in the universe. He was born in Pittsburgh, Pennsylvania but grew up in Lima, Ohio after his father moved to the latter city after being transferred. Right from his time at high school, he displayed an aptitude for the sciences and engineering. He took admission at the Ohio State University with the intention to study ceramic engineering but his growing interest in physics made him change his mind and he graduated in engineering physics. Subsequently, he studied at the elite California Institute of Technology, from where he was awarded his Ph.D. and was associated with the Institute for the major part of his academic career. He served as an assistant professor and then as a full professor at the California Institute of Technology and also served the army in a non-military role during the Second World War. William Fowler, in full William Alfred Fowler, was born in Pittsburgh in Pennsylvania, the United States on 9 August 1911, to John Macleod Fowler and his wife Jenni Summers Watson Fowler. His father was employed in the capacity of an accountant. William had a younger brother and a younger sister. He grew up in the city of Lima in Ohio since the family had moved following his father’s transfer. Initially, he studied at the Horace Mann Grade School and later on went on to graduate from Lima Central High School in 1929. In school, he showed an early interest in the sciences and engineering.

While in high school, Fowler won a prize for an essay on the production of cement. Upon graduation in 1929 he selected ceramic engineering as a course of study when he matriculated that fall at Ohio State University in Columbus. As a sophomore, he switched his academic focus to engineering physics. During the summer he worked as a recreation director at his boyhood elementary school in Lima, while during the academic year he waited on tables, washed dishes, and fired furnaces at a university sorority. On weekends, he cut and sold ham and cheese in an outdoor stall in a Columbus market.

After graduating from high school, Fowler took admission to the Ohio State University to study ceramic engineering. However, his interest in physics made him switch to engineering physics. Following his graduation from Ohio State University in 1933, he went to California Institute of Technology for his post-graduate education. He received his doctorate in 1936 from the same institute in nuclear physics.

William Alfred Fowler got married to Adriane Foy Olmsted on 24 August 1940. The couple had two daughters, named, Mary and Martha. After attaining his doctorate from the California Institute of Technology, William Alfred Fowler was appointed as an assistant professor at the institute in 1939 and during that period he was engaged in studying the nuclear reactions of the protons of carbon and nitrogen isotopes. The experiments commence following the discovery of the CN cycle by Hans Bethe. When the Second World War was in full swing, the Kellogg Laboratory at the California Institute of Technology was given away for defense research.

In August 1940 Fowler married Ardiane Foy Olmsted; they had two daughters. That same year, and continuing for most of World War II, Fowler and most of the Kellogg Laboratory staff were engaged in weapons research for the government that included work on proximity fuses for bombs and ordnance rockets for the U.S. Navy.

In fact, in 1944, Fowler was sent to the South Pacific to assist the American forces and he stayed there in a nonmilitary capacity for three months. Two years later, he was appointed as a full professor by the California Institute of Technology. He spent the better part of the 1950s in research related to experimental physics and one of his most celebrated work was the paper ‘Synthesis of the Elements in Stars’ which he co-authored with Fred Hoyle, Margaret Burbidge, and Geoffrey Burbidge. The paper was published in the year 1957 and suggested that the process of synthesis of elements in stars starts from lighter elements.

His theory of element generation, which he developed with Sir Fred Hoyle, Margaret Burbidge, and Geoffrey Burbidge in the 1950s, suggests that in stellar evolution elements are synthesized progressively from light elements to heavy ones, in nuclear reactions that also produce light and heat. With the collapse of more massive stars, the explosive rebound known as supernova occurs; according to theory, this phase makes possible the synthesis of the heaviest elements.

Although an experimental nuclear physicist, Fowler’s most famous paper was “Synthesis of the Elements in Stars”, coauthored with Cambridge cosmologist Fred Hoyle and in collaboration with two young Cambridge astronomers, E. Margaret Burbidge, and Geoffrey Burbidge. That 1957 paper in Reviews of Modern Physics categorized most nuclear processes for the origin of all but the lightest chemical elements in stars. It is widely known as the B2FH paper.

Another of Fowler’s collaborators was the English astrophysicist and cosmologist Fred Hoyle, whom Fowler described as the second great influence in his life after Lauritsen. Hoyle in the early 1950s had conjectured that in order for carbon to exist in the universe (and therefore enable the existence of human beings on earth) it must be manufactured in stars. This could only happen if three helium nuclei (each with two protons and two neutrons) fuse together to form the isotope carbon-12 in an excited energy state level above the neutral ground state. Despite theoretical reasons for believing this nuclear reaction could not occur, Hoyle persuaded Fowler to investigate the question experimentally. Fowler then established the validity of Hoyle’s hypothesis.

Subsequently, Fowler became the director of the Kellogg Laboratory at the California Institute of Technology. Other than his work on element generation, he was also involved in research related to the field of radio astronomy, with Fred Hoyle at the Institute of Theoretical Physics, established in 1966, at the University of Cambridge. He continued to work at Kellogg Laboratory simultaneously.

Fowler succeeded Charles Lauritsen as director of the Kellogg Radiation Laboratory at Caltech and was himself later succeeded by Steven E. Koonin. Fowler was awarded the National Medal of Science by President Gerald Ford. Fowler was the doctoral advisor at Caltech for Donald D. Clayton, who became the leader of the next generation of nuclear astrophysics and who in 2000 was elected Fellow of American Academy of Arts and Sciences. A lifelong fan of steam locomotives, Fowler owned several working models of various sizes, one pictured here. Fowler also worked in radio astronomy, proposing with Hoyle that the cores of radio galaxies are collapsed “superstars” emitting strong radio waves and that quasars are larger versions of these collapsed superstars.

The most important work in his life as a scientist was achieved when he conducted a long drawn out study on nuclear reactions and elemental generation at the Kellogg Laboratory at the California Institute of Technology. His theories on elemental generation won him the Nobel Prize in 1983, which he shared with Subrahmanyan Chandrashekhar who had conducted an independent study on the same subject.

Fowler was awarded the Barnard Medal for Meritorious Service to Science in 1965.

Fowler won the Henry Norris Russell Lectureship of the American Astronomical Society in 1963, and the Vetlesen Prize in 1973.

In 1983, William Alfred Fowler shared the Nobel Prize in Physics with Subramanyan Chandrasekhar. Fowler was awarded “for his theoretical and experimental studies of the nuclear reactions of importance in the formation of the chemical elements in the universe”.

William Alfred Fowler died on 14 March 1995 due to kidney failure in Pasadena, California, U.S. at the age of 83. He was cremated and his remains are in a private location in Vermont, where he loved to visit his daughter and only grandchild.

His most significant work was his theoretical and experimental studies of the nuclear reactions of importance in the formation of the chemical elements in the universe”.

Besides bringing extraordinary personal scientific ability and energy to his work, what emerges clearly from Fowler’s distinguished research career was his ability to bring out the best in people. Unlike Nobel Prize-winning scientists Albert Einstein and Paul Dirac, whose exceptional discoveries were uniquely individual and did not depend materially on the efforts of others, Fowler’s accomplishments were frequently the result of collaboration, sometimes with his leadership and at other times with the initiative of others.