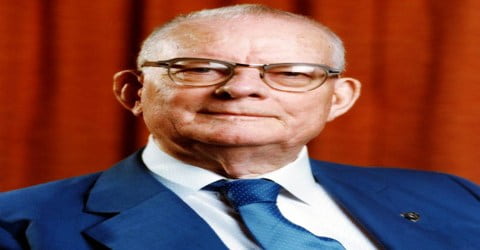 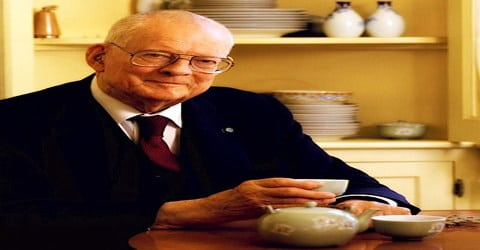 An American statistician, educator, and management consultant, who created the new quality-control methods and developed the sampling techniques for U.S. Census, William Edwards Deming was born on 14th October 1900, in Sioux City, Iowa, U.S. the oldest son of Pluma Irene and William Albert Deming. He developed his management theory while working as an economic consultant in Japan after World War II. Eventually, his ideas took hold in the United States as well, and many major corporations began to incorporate quality control into their businesses through Deming’s teachings.

Deming was made a member of the five-man Emergency Technical Committee to work on the compilation of the American War Standards. He is best known for his work in Japan after the Second World War. There he taught top business managers how to improve service, product quality, testing, and sales by various means, including the application of statistical methods. His contribution to the Japanese economy made him into somewhat a hero in Japan, which is why he was awarded Japan’s Order of the Sacred Treasure, Second Class in 1960. Apart from that, he won the National Medal of Technology and the Distinguished Career in Science award from the National Academy of Sciences. Around the time of his death, he founded the W. Edwards Deming Institute in Washington, D.C., where the Deming Collection at the U.S. Library of Congress includes an extensive audiotape and videotape archive. The motto of the Institute is to promote understanding of the Deming System of Profound Knowledge to advance business, success, and harmony.

Deming is best known in the United States for his 14 Points (Out of the Crisis, by W. Edwards Deming, preface) and his system of thought he called the “System of Profound Knowledge”. The system includes four components or “lenses” through which to view the world simultaneously: Appreciating a system; Understanding variation; Psychology; Epistemology, the theory of knowledge. 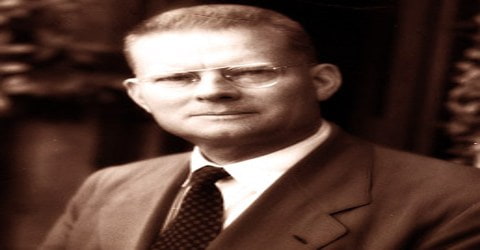 W. Edwards Deming, in full William Edwards Deming, was born on 14th October 1900 in Sioux City, Iowa, U.S. to William Albert and Pluma Irene Edwards. His father was an insurance agent and lawyer and his mother was a piano teacher. His parents were quite well-read, his father had studied mathematics and law and his mother was a learned musician from San Francisco, which is why they always emphasized on Deming’s education.

In 1917, Deming started his education at the University of Wyoming and received a BS in electrical engineering in 1921. He earned an MS from the University of Colorado (1925), and a Ph.D. from Yale University (1928). Both graduate degrees were in mathematics and physics. He then taught physics at several universities, worked as a mathematical physicist at the United States Department of Agriculture (1927-39), and was a statistical adviser for the U.S. Census Bureau (1939-45). He studied under Sir Ronald Fisher and Jerzy Neyman at University College, London, England, in 1936.

In 1922, W. Edwards Deming got married to Agnes Bell. She died in 1930, a little more than a year after they had adopted a daughter, Dorothy. Deming made use of various private homes to help raise the infant.

In 1932, Deming got married to Lola Elizabeth Shupe, a teacher for mathematics and co-author of his several papers; he brought her back home to stay. Lola and he had two more children, Diana (b. 1934) and Linda (b. 1943). Deming was survived by Diana and Linda, along with seven grandchildren. 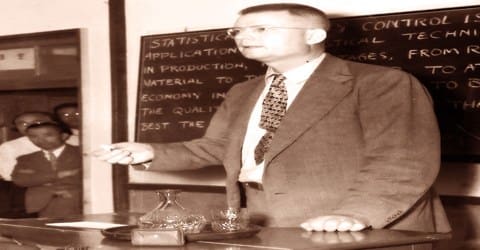 In 1939, Deming edited a series of lectures delivered by Walter A. Shewhart of the Bell Telephone Laboratories, at USDA, ‘Statistical Method from the Viewpoint of Quality Control’, into a book published. In the following year, he developed the sampling techniques that were used for the first time during the 1940 U.S. Census, formulating the Deming-Stephan algorithm for iterative proportional fitting in the process. He was made the member of the five-man Emergency Technical Committee to work on the compilation of the American War Standards and taught statistical process control techniques to the workers involved in wartime production.

Deming became interested in ways that statistical analysis could achieve better quality control in industry, in the 1930s. Deming’s quality-control methods were based on a systematic tallying of product defects that included the identification and analysis of their causes. Once the causes of defects were corrected, the outcomes were tracked to measure the effects of those corrections on subsequent product quality.

W. Edwards Deming developed the sampling techniques that were used for the first time during the 1940 U.S. Census, formulating the Deming-Stephan algorithm for iterative proportional fitting in the process. During World War II, Deming was a member of the five-man Emergency Technical Committee. He worked with H.F. Dodge, A.G. Ashcroft, Leslie E. Simon, R.E. Wareham, and John Gaillard in the compilation of the American War Standards (American Standards Association Z1.1-3 published in 1942) and taught SPC techniques to workers engaged in wartime production. Statistical methods were widely applied during World War II but faded into disuse a few years later in the face of huge overseas demand for American mass-produced products.

Deming gave up his government career to start his own international consulting firm after World War II (1939-1945). His aim was to help war-torn countries rebuild their economies. Deming traveled to such diverse countries as Greece, Turkey, India, West Germany, and Mexico, and he even worked with the United Nations. However, it was in Japan that Deming made his biggest mark.

Deming joined the staff at New York University’s graduate school of business administration as a professor of statistics, in 1946. In the following year, he was engaged in early planning for the 1951 Japanese Census. He became a part of the Japanese Union of Scientists and Engineers (JUSE) and from 1950, he started training hundreds of engineers, managers, and scholars in statistical process control (SPC) and concepts of quality. The Prime Minister of Japan (Nobusuke Kishi) awarded Deming Japan’s Order of the Sacred Treasure, Second Class in 1960. The quotation on the medal recognizes Deming’s contributions to Japan’s industrial revival and its global accomplishments.

Deming is probably best known for his “14 Points for Management.” Among other things, this plan encourages leaders to stop doing business based on price alone, to constantly improve the production system, to utilize job training, and to encourage pride in workmanship. Deming also taught management leaders to encourage cooperation at all levels. In addition, he instructed them to assure job stability and to equally value all employees.

After coming back to America, Deming ran his own consultancy business from Washington D.C. and in 1980, he was featured in an NBC TV documentary, ‘If Japan can…Why can’t we?’. This invariably increased the demand for his expertise. Deming was hired by Ford Motor Company’s newly appointed Division Quality Manager, John. A. Manoogian to help Ford increase its sales, in 1981. With the help of Deming’s insights, by 1986 Ford became the most profitable American auto company.

Deming’s book Quality, Productivity, and Competitive Position was published by the MIT Center for Advanced Engineering, in 1982, and was renamed Out of the Crisis in 1986. In it, he offers a theory of management based on his famous 14 Points for Management. Management’s failure to plan for the future brings about loss of market, which brings about loss of jobs. Management must be judged not only by the quarterly dividend, but also by innovative plans to stay in business, protect investment, ensure future dividends, and provide more jobs through improved products and services. “Long-term commitment to new learning and new philosophy is required of any management that seeks transformation. The timid and the fainthearted, and the people that expect quick results, are doomed to disappointment.” 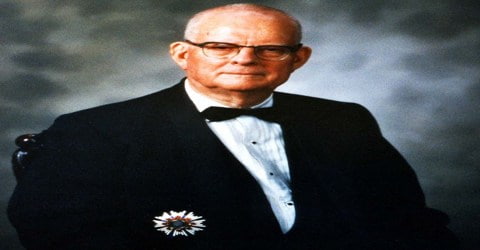 From 1985 through 1989, Deming served as a consultant to Vernay Laboratories, a rubber manufacturing firm in Yellow Springs, Ohio, with fewer than 1,000 employees. He held several week-long seminars for employees and suppliers of the small company where his infamous example “Workers on the Red Beads” spurred several major changes in Vernay’s manufacturing processes.

W. Edwards Deming was finally recognized for his contributions in the United States in 1987, when he received a special award, the National Medal of Technology, at the White House. The award was in recognition of his determined support of statistical methodology, his contributions to sampling theory, and his advocacy of these methods to corporations. Deming continued to teach his business philosophy until his death in 1993. He published his final book, ‘The New Economics for Industry, Government, and Education’ in 1993, which included the ‘System of Profound Knowledge’ and the ‘14 Points for Management’.

In 1960, the Prime Minister of Japan (Nobusuke Kishi), acting on behalf of Emperor Hirohito, awarded W. Edwards Deming Japan’s Order of the Sacred Treasure, Second Class. The citation on the medal recognizes Deming’s contributions to Japan’s industrial rebirth and its worldwide success.

In 1991, Deming was inducted into the Automotive Hall of Fame.

On 20th December 1993, W. Edwards Deming died in his sleep at the age of 93 in his Washington home from cancer.

During his last year in 1990, Deming founded the W. Edwards Deming Center for Quality, Productivity, and Competitiveness at Columbia Business School to promote operational excellence in business through the development of research, best practices, and strategic planning.

Deming’s work in Japan is considered as the most important contribution of his life. He taught top business managers how to improve service, product quality, testing, and sales by various means, including the application of statistical methods. His contribution to the Japanese economy made him into somewhat a hero in Japan, and he was awarded Deming Japan’s Order of the Sacred Treasure, Second Class in 1960.

The Deming Prize (established 1951), awarded annually to Japanese corporations that win a rigorous quality-control competition, is named in Deming’s honor. It was not until the 1980s that Deming’s ideas were adopted by American corporations seeking to compete more effectively in the world market.