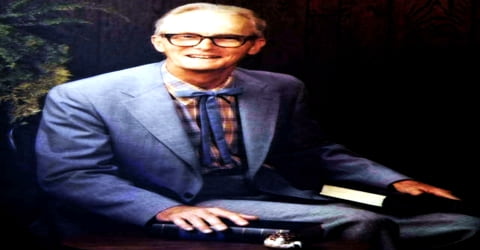 An American physical chemist who won the Nobel Prize for Chemistry in 1976 for his research on the structure and bonding of boron compounds and the general nature of chemical bonding, William Lipscomb was born on December 9, 1919, Cleveland, Ohio, U.S.

Renowned for his works in the fields of nuclear magnetic resonance, theoretical chemistry, boron chemistry, and biochemistry, Lipscomb was awarded the Nobel Prize for his research on the structure of molecules and on chemical bonding. A protégé of the two-time Nobel laureate Linus C. Pauling, he continued his mentor’s work at the California Institute of Technology (Caltech) in the 1940s. Growing up in a home where independent thinking and intellectual pursuits were encouraged, he became fascinated with chemistry as a young boy. He received a small Gilbert chemistry set when he was 12 and he was hooked. He grew up to receive his Bachelor of Science degree in Chemistry from the University of Kentucky following which he went to the California Institute of Technology (Caltech) for his doctorate. He was greatly influenced by his mentor Linus C. Pauling and eventually ventured into an academic career. He joined the faculty of the University of Minnesota in 1946 and moved to Harvard University after 13 years. He also served on the board of directors of Dow Chemical. Known for his multiple talents, he was a classical clarinetist who performed in chamber groups. William Lipscomb, in full William Nunn Lipscomb, Jr., was born on December 9, 1919, in Cleveland, Ohio, US. His father was a physician while his mother taught music. He was interested in scientific pursuits from a young age. He collected animals, insects, and rocks, and regularly visited the Observatory of the University of Kentucky. A turning point in his young life was when he received a small Gilbert chemistry set at the age of 12. Thus began his fascination with chemistry which led him to perform many experiments, including making his own fireworks.

Initially, he intended to study theoretical quantum mechanics with Prof. W. V. Houston in the Physics Department but changed his mind after one semester. He switched to the Chemistry Department under the influence of Prof. Linus Pauling in 1942 and became involved in research and development related to the ongoing World War II. He mostly worked with nitroglycerin-nitrocellulose propellants. In 1946, he was awarded his Doctor of Philosophy degree in Chemistry.

William Lipscomb was married to the former Mary Adele Sargent from 1944 to 1983. They had three children, one of whom lived only a few hours.

His second marriage in 1983 was to Jean Evans with whom he adopted a daughter. William Lipscomb worked as a physical chemist in the Office of Science Research and Development from 1942 to 1946 and then joined the University of Minnesota as an assistant professor. He worked there for 13 years before moving to Harvard University as a professor of chemistry in 1959. There he also served as chairman of the department of chemistry from 1962 to 1965.

Lipscomb has worked in three main areas, nuclear magnetic resonance and the chemical shift, boron chemistry and the nature of the chemical bond, and large biochemical molecules. These areas overlap in time and share some scientific techniques. In at least the first two of these areas Lipscomb gave himself a big challenge likely to fail, and then plotted a course of intermediate goals.

By 1959, when he left the university, he was a professor and chief of the physical chemistry division. He then became a professor of chemistry at Harvard University, where he served as chairman of the department of chemistry from 1962 to 1965. By developing X-ray techniques that later proved useful in many chemical applications, Lipscomb and his associates were able to map the molecular structures of numerous boranes and their derivatives. Boranes are compounds of boron and hydrogen. The stability of boranes could not be explained by traditional concepts of electron bonding, in which each pair of atoms is linked by a pair of electrons, because boranes lacked sufficient electrons. Lipscomb showed how a pair of electrons could be shared by three atoms. His theory successfully served to describe boranes and many other analogous structures.

Lipscomb continued his research throughout his teaching career and was awarded the Abbott and James Lawrence Professorship in 1971 at Harvard. He became a professor emeritus in 1990. From 1982 to 1990, he also served on the board of directors of Dow Chemical. His research majorly involved developing X-ray diffraction techniques. Working in this field, Lipscomb and his associates were able to map the molecular structures of numerous boranes and their derivatives. Boranes are compounds of boron and hydrogen.

Lipscomb investigated, “… the carboranes, C2B10H12, and the sites of an electrophilic attack on these compounds using nuclear magnetic resonance (NMR) spectroscopy. This work led to Lipscomb’s publication of a comprehensive theory of chemical shifts. The calculations provided the first accurate values for the constants that describe the behavior of several types of molecules in magnetic or electric fields.” Much of this work is summarized in a book by Gareth Eaton and William Lipscomb, NMR Studies of Boron Hydrides and Related Compounds, one of Lipscomb’s two books.

Lipscomb dedicated several years of his career to the study of boranes. While some of his more ambitious experiments in the field failed to yield the desired results, he was able to perform significant works in boron chemistry and achieved considerable success in his research involving boron bonding. He deduced the molecular structure of boranes using X-ray crystallography and developed theories to explain their bonds. Using the same methods, he was also able to deduce the structure of carboranes (compounds of carbon, boron, and hydrogen). His team gave a proposed mechanism of the three-center two-electron bond. While the group did not discover the three-center two-electron bond, they used already existing formulas to understand the quantum mechanical details of such bonds. The 1976 Nobel Prize in Chemistry was awarded to Lipscomb “for his studies on the structure of boranes illuminating problems of chemical bonding”. In a way this continued work on the nature of the chemical bond by his Doctoral Advisor at the California Institute of Technology, Linus Pauling, who was awarded the 1954 Nobel Prize in Chemistry “for his research into the nature of the chemical bond and its application to the elucidation of the structure of complex substances.”

During the later part of his career, Lipscomb focused on the atomic structure of proteins, particularly how enzymes work. His group used x-ray diffraction to solve the three-dimensional structure of these proteins to atomic resolution. His group also contributed to an understanding of concanavalin A, glucagon, and carbonic anhydrase.

Lipscomb was made a Guggenheim Fellow in 1954 and a Fellow of the American Academy of Arts and Sciences in 1960.

Lipscomb was awarded the Nobel Prize in Chemistry in 1976 “for his studies on the structure of boranes illuminating problems of chemical bonding”.

Working along with his associates, William Lipscomb deduced the molecular structure of boranes (compounds of boron and hydrogen) using X-ray crystallography which later proved useful in many chemical applications. The team’s research showed how a pair of electrons could be shared by three atoms and led to the proposed mechanism of the three-center two-electron bond.