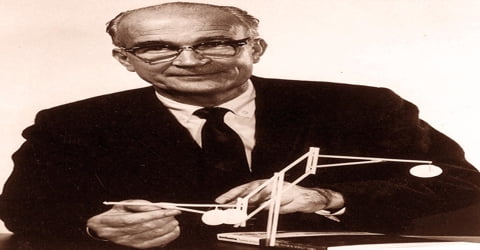 An American engineer and teacher, co-winner (with John Bardeen and Walter H. Brattain) of the Nobel Prize for Physics in 1956 for their development of the transistor, a device that largely replaced the bulkier and less-efficient vacuum tube and ushered in the age of microminiature electronics, William Shockley was born on February 13, 1910 to American parents in London and was raised in his family’s hometown of Palo Alto, California from the age of three.

A graduate of California Institute of Technology and the Massachusetts Institute of Technology, Shockley worked at Bell Labs for a considerable amount of time to work on what would become his making. He headed numerous research teams and worked on many notable scientific studies. During the latter part of his life, Shockley dabbled in eugenics. His studies and theories of black inferiority made him an academic pariah. His personal life was marred by estrangement. His children from his first marriage, whom he barely spoke to during his lifetime, did not even attend his funeral when he passed away. His long-term companion was his second wife, Emmy. His extreme mood swings and stubborn nature took away the essence of what made him a great scientist and left him a man whose legacy lived on in his work and not as a human being.

As a result of Shockley’s attempts to commercialize a new transistor design in the 1950s and 1960s, California’s “Silicon Valley” became a hotbed of electronics innovation. In his later life, Shockley was a professor of electrical engineering at Stanford University and became a proponent of eugenics. William Shockley, in full William Bradford Shockley Jr., was born on February 13, 1910, in London, England. His father, William Hillman Shockley was a mining engineer and his mother, Mary Bradford was the first female US Deputy mining surveyor. His parents were American and he grew up in Palo Alto, California from age 3. He was home-schooled until the age of 8. This was because his parents thought they could provide education better than any school. Another reason could have been that they often moved from one place to another. As a child, Shockley was quite ill-tempered and spoiled; traits he inherited from his parents. But he also possessed a funny bone and was a practical joker in college.

Shockley studied physics at the California Institute of Technology (B.S., 1932) and at the Massachusetts Institute of Technology (Ph.D., 1936). He joined the technical staff of the Bell Telephone Laboratories in 1936 and there began experiments with semiconductors that ultimately led to the invention and development of the transistor. The next few years were productive for Shockley.

Shockley published a number of fundamental papers on solid state physics in Physical Review. In 1938, he got his first patent, “Electron Discharge Device”, on electron multipliers. During World War II, he served as director of research for the Antisubmarine Warfare Operations Research Group of the U.S. Navy.

While still a student, William Shockley married Jean Bailey at age 23 in August 1933. In March 1934, the couple had a daughter, Alison. Later the couple divorced. Shockley became an accomplished rock climber, going often to the Shawangunks in the Hudson River Valley. A route there is named “Shockley’s Ceiling”. He was an amateur magician, speaker, as well as lecturer. He was also known in his early years for his elaborate practical jokes.

Shockley married Emmy Lanning, a psychiatric nurse, later. She outlived him by 18 years and passed away on April 28, 2007.

Shockley donated sperm to the Repository for Germinal Choice, a sperm bank founded by Robert Klark Graham in hopes of spreading humanity’s best genes. The bank, called by the media the “Nobel Prize sperm bank,” claimed to have three Nobel Prize-winning donors, though Shockley was the only one to publicly acknowledge his donation to the sperm bank. However, Shockley’s controversial views brought the Repository for Germinal Choice a degree of notoriety and may have discouraged other Nobel Prize winners from donating sperm. At Bell Labs, William Shockley and two of his colleagues, John Bardeen and Walter Brattain, invented the transistor in 1947, for which they were awarded the Nobel Prize in 1956. Despite conflicts between the three, and efforts to work secretly without the knowledge of other members, the prize was eventually received and shared by all three. The invention of the transistor was a crucial discovery that marked the beginning of the electronic age as transistors are used in practically all modern electronic devices such as watches, calculators, cars, computers, washing machines, etc. He took a leave of absence from work during World War II to act as a director of research at Columbia University’s “Anti Submarine Warfare” Operations Group in 1942. He returned to Bell Laboratories in 1945 as director of solid-state physics research. Later in his life, he was appointed as the Alexander M. Poniatoff Professor of Engineering and Applied Science at Stanford University.

In 1944, Shockley organized a training program for B-29 bomber pilots and took tours around the world to analyze results. The training involved the usage of new radar bomb sights. For this, he was awarded the “Medal for Merit” on October 17, 1946. He was asked to prepare a report on the casualties from Japan’s invasion in July 1945 by the War Department.

If the study shows that the behavior of nations in all historical cases comparable to Japan’s has in fact been invariably consistent with the behavior of the troops in battle, then it means that the Japanese dead and ineffective at the time of the defeat will exceed the corresponding number for the Germans. In other words, we shall probably have to kill at least 5 to 10 million Japanese. This might cost us between 1.7 and 4 million casualties including 400,000 to 800,000 killed.

This report influenced the decision of the United States to drop atomic bombs on Hiroshima and Nagasaki, which precipitated the unconditional surrender of Japan.

Shockley was the first physicist to propose a lognormal distribution to model the creation process for scientific research papers.

Shockley published a 558-page treatise, ‘Electrons and Holes in Semiconductors’, a collection of his research and work in 1950. This would go on to become a reference for other scientists working on the development of semiconductors and their variants. He invented the junction transistor in 1951 and announced his invention at a press conference on July 4 of that year. The same year, Shockley was elected a member of “National Academy of Sciences” (NAS), a post that was too high for someone as young as 41. He received the “Comstock Prize” in 1953 from the NAS as well as many other honors.

Shockley was deputy director of the Weapons Systems Evaluation Group of the Department of Defense in 1954-55. He joined Beckman Instruments, Inc., to establish the Shockley Semiconductor Laboratory in 1955. In 1958 he became a lecturer at Stanford University, California, and in 1963 he became the first Poniatoff professor of engineering science there (emeritus, 1974). He wrote Electrons and Holes in Semiconductors (1950).

Shockley moved to Mountain View in California in 1956 and set up the “Shockley Semiconductor Laboratory”. After his Nobel victory, he became paranoid and autocratic forcing 8 colleagues at his lab to resign. These 8 went on to form the “Fairchild Semiconductor” without him. He was appointed to the President’s Scientific Advisory Committee in 1962. In 1963, he received the Holley Medal of the American Society of Mechanical Engineers.

Although he was often a difficult and demanding person, Dr. Shockley was a popular lecturer. He had an adventurous nature and enjoyed rock climbing in the Hudson River valley, where a route discovered by him has been named “Shockley’s Ceiling”. He was also an amateur magician and loved to plan and execute elaborate practical jokes. In later life, when Dr. Shockley was in his sixties, he frequently donated sperm stating that he hoped to replicate his genius by spreading his genes. One of the biggest controversies surrounding his work started when he proposed a genetic theory stating that blacks were intellectually inferior to whites because of their genetic structure, and for this reason, white races would always dominate black ones. He argued that a higher rate of reproduction amongst black races would lower the average IQ of the human race and would eventually lead to a decline of modern civilization. His views often made him unpopular amongst his peers and contemporaries.

Late in his life, Shockley became intensely interested in questions of race, human intelligence, and eugenics. He thought this work was important to the genetic future of the human species and he came to describe it as the most important work of his career, even though expressing his views damaged his reputation. Shockley argued that a higher rate of reproduction among the less intelligent was having a dysgenic effect and that a drop in average intelligence would ultimately lead to a decline in civilization. Shockley’s published writings and lectures to scientific organizations on this topic were partly based on the writings of psychologist Cyril Burt and were funded by the Pioneer Fund. Shockley also proposed that individuals with IQs below 100 be paid to undergo voluntary sterilization. William Shockley was appointed the first Alexander M. Poniatoff professor of engineering science in 1963 at Stanford University, a promotion from being a lecturer when he joined in 1958. He remained in this position until his retirement in 1975. By the end of his life, Shockley was alienated from most of his colleagues except a few select friends and his wife. His was even estranged from his own children, who learned of his death through the media.

William Shockley’s crowning glory was the “Nobel Prize for Physics” in 1956. It was awarded to him for the invention of the “point-contact transistor” in 1947. He was the co-recipient of the award along with his colleagues John Bardeen and Walter Brattain.

Shockley had to his name over 90 US patents, the first of which was the “Electron Discharge Device” on electron multipliers.

His contribution to science earned him many honors and medals. The Institute of Radio Engineers (now, Institute of Electrical and Electronics Engineers, IEEE) awarded him the Maurice Liebman Memorial Prize in 1980.

William Shockley died of prostate cancer in 1989 at the age of 79. At the time of his death, he was almost completely estranged from most of his friends and family, except his second wife, the former Emmy Lanning (1913-2007). His children reportedly learned of his death by reading newspapers. Shockley is interred at Alta Mesa Memorial Park in Palo Alto, California.

Shockley’s “point-contact transistor” was a major influence in helping usher an age of microminiature electronics. He managed a research team that consisted of himself, John Bardeen, and Walter H. Brattain and used semiconductors to amplify electronic signals. The transistor was further improved which replaced the bulky and less-efficient vacuum tubes. Though his most significant work included semiconductors, he considered genetics his primary field.

In 1981 William Shockley filed a libel suit against the Atlanta Constitution after a science writer, Roger Witherspoon, compared Shockley’s advocacy of a voluntary sterilization program to Nazi human experimentation. The suit took three years to go to trial. Shockley won the suit but received only one dollar in damages and no punitive damages. Shockley’s biographer Joel Shurkin, a science writer on the staff of Stanford University during those years, sums this up as saying that the statement was defamatory, but Shockley’s reputation was not worth much by the time the trial reached a verdict. Shockley taped his telephone conversations with reporters and then sent the transcript to them by registered mail. At one point he toyed with the idea of making them take a simple quiz on his work before discussing the subject with them. His habit of saving all his papers (including laundry lists) provides abundant documentation for researchers on his life.

Shockley held that standardized intelligence tests reflect a genetic factor in intellectual capacity and that tests for IQ (intelligence quotient) reveal that blacks are inferior to whites. He further concluded that the higher rate of reproduction among blacks had a retrogressive effect on evolution.