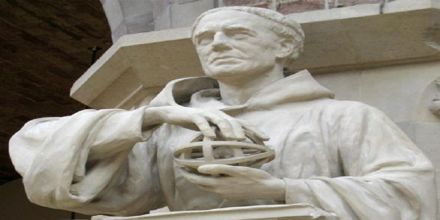 Roger Bacon, OFM was a 13th century English philosopher and Franciscan Friar who was posthumously awarded the scholastic accolade “Doctor Mirabilis” meaning “Wonderful Teacher”. Not much is known about him or his family with certainty, but it is believed that they were wealthy and were exiled in the times of King Henry III of England. He received his education at Oxford and soon began teaching there. He was a disciple of the famous scholastic philosopher and theologian, Robert Grosseteste. At Oxford and at the University of Paris where he later taught, he talked about the importance of modern scientific methods introduced by Aristotle. Drawing inspiration from Aristotle and the Muslim scientist Alhazen he invested a lot of money in gathering secret books, conducting experiments and learning other languages. He became a Friar in the Franciscan Order, but his relationship with the other members was strained and his beliefs led to disagreements and finally imprisonment/house arrest. Contrary to the view that he was a modern thinker, scholars now think of him as a brilliant schoolman, who at the right time understood the advantages of the new learning and the importance of philosophy. He is also accredited for inventing gunpowder and reforming the calendar, while predicting submarines, automobiles and aircrafts.

Roger Bacon was born in Ilchester in Somerset. His exact year of birth has always been a topic for controversy and historians state it as 1213 or 1214, going by his statement in the book ‘Opus Tertium’, written in 1267.

The only information known about his family today is that they were considerably wealthy but during the reign of Henry III of England most of them were exiled and their property was annexed. His earliest education was in geometry, arithmetic, music, astronomy and the classics. For further education he went to the Oxford University and developed an interest in natural philosophy and mathematics. It is believed that he did his M.A. either at Oxford or at Paris, in 1240.

It appears that Bacon was born in Ilchester, Somerset, England. He was born into a noble family, although not a major one. In his youth he studied the works of the ancient Greeks as well as arithmetic, geometry, astronomy, and music. At thirteen years old he entered Oxford University, where he spent the next eight years. He eventually received an advanced arts degree.

In the 1240s, perhaps in the early years of the decade, Bacon lectured at the University of Paris, France, on the works of the ancient Greek philosopher Aristotle (c. 384–c. 322 B.C.E. ). During this period he also wrote three works on logic, or the study of how to reason correctly. Within relatively few years there were three important events in Bacon’s life: his return to England from France, the awakening of his scientific interests, and his entry into the Franciscan order, the Christian group founded by St. Francis of Assisi (1182–1226).

Roger Bacon was born near Ilchester, in Somersetshire, of a respectable family. He was educated at Oxford, and, according to the usual custom of his day, proceeded to F’aris, which was then the first university in the world. The course of study in vogue, however unfavorable to independence of thought, did not give so great a preponderance to the works of Aristotle as was afterwards the case. The theology of the day had set strongly against philos- ophy of every species. In 1209 a council at Paris condemned and burnt, if not the works of Aristotle, at least the inutilated and inter- polated translations from the Arabic which then existed. But when, towards the middle of the century, Latin versions from the Greek began to appear, and the philosophy contained in them to be warmly advocated by the new orders of Franciscans and Dominicans, and particularly by Albertus Magnus (died 1282), the reputation of Aristotle advanced so raj^idly. that he had gained the exclusive title of “the philosopher” by the time Roger Bacon wrote his Opus majiis. But Bacon in no sense became an Aristotelian, except in that which comprehends all who are acquainted with the opinions and methods of the Greek philosopher.

Roger Bacon became a master at Oxford. He gave lectures in the faculty of arts and they were mainly about Aristotelian and pseudo-Aristotelian treatises. His next appointment was at the Paris University and he joined it somewhere between 1237 and 1245. Here he talked about Aristotelian Corpus (Compilation of Aristotle’s work) which included physics, meta-physics and the pseudo-Aristotelian De Vegetabilibus and the De Causis. In 1247, he was inspired by the great scholar Robert Grosseteste and he began investing his time and money in acquiring secret books, training assistants, meeting savants and constructing instruments. He ardently researched optics, alchemy, astronomy and linguistics. With some certainty it can be stated that he became a friar in the Franciscan Order in 1256 and in 1260, Master General Bonaventure issued a decree that prohibited friars from publishing books without the Order’s prior approval. Bonaventure and Bacon remained much at odds due to their individual beliefs. Bonaventure believed that astrology was helpful in only predicting the things solely dependent on movement of heavenly bodies and that base metals couldn’t be converted into gold/silver; Bacon differed on both accounts.

About 1257 Bacon was taken from England to France and, for unknown reasons, underwent some kind of confinement, perhaps even an imprisonment, in a French monastery. One theory is that people questioned him because of his scientific interests, but it is more likely that his views on Franciscan life proved unpopular with some Franciscans in England.

During this period of confinement Bacon wrote his greatest works: Opus majus (major work), Opus minus (minor work), and Opus tertium (third work). Disagreements among scholars concerning the order and purposes of these works show once again the many unknowns concerning Bacon’s life. In Opus majus he made use of scientific materials already written, added new material, and included a section on moral theory. With respect to the sciences, the overall tone of Opus majus is a plea, attempting to persuade the pope (the head of the Catholic Church) about the importance of experimental knowledge.

After the three works, Bacon wrote a great part of Communium naturalium (general principles of natural philosophy), one of his finest works. In 1272 he published another book on the study of philosophy in which the old, angry, argumentative Bacon reemerges. In it he claimed to see the presence of the antichrist in the then-warring Christian groups, and he took in general the extreme view of Franciscan life. It is also possible that an imprisonment in the final years of his life stems from this book.

Roger Bacon is accepted as one of the earliest European advocates of the modern scientific methods in which results are cited only after experimentation and not solely on the basis of the findings of predecessors. He used parts of glass spheres as magnifying glasses to demonstrate that light reflects from objects rather than being released from them and for the first time introduced a mixture which could be used in making gunpowder.

Many books have been written about him including ‘Doctor Mirabilis’, ‘The Face in the Frost’, ‘Fifth Business’ and ‘The Black Rose’.

The Impact of Bacon’s Life

It is difficult to accurately assess Bacon’s influence in bringing about that revolutionary period in human thought – the Renaissance – that began several hundred years after his death.  Whether his work was widely influential or whether the “scientific method” was independently rediscovered really makes no difference in judging the greatness of the man himself.  His ethical standards in science and his relentless pursuit of truth stand as a beacon to inspire us all to the utmost in keen, objective observation and scrupulous honesty in all of our undertakings.

It is to his beliefs that the Academy is dedicated.  Furthermore, Bacon sets an example that each of us can emulate.  We may have trouble imagining ourselves as a modern day Leonardo or a George Washington or a Martin Luther King.  These great men had qualities of leadership and genius that we might find difficult to imitate.  But Bacon was a man whose source of greatness – his determination to always seek truth – is seeded within every one of us.  There is no ability, nor accident of birth, nor any environmental factor that can possibly preclude any of us from nurturing this seed and achieving the same greatness as Bacon’s.  The only factor is our own self-determination – our own will to live an honest life and to seek truth in the universe.