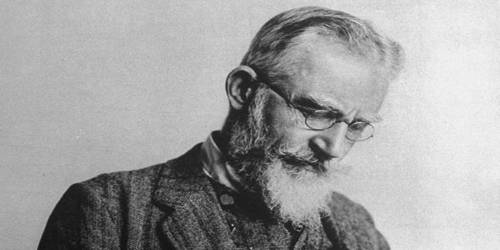 George Bernard Shaw is a remarkable playwright. He was born on July 26, 1856, in Dublin, Ireland. His father George Carr Shaw was an unsuccessful grain merchant. His mother Lucinda Elizabeth Shaw was a professional singer. He was an Irish comic dramatist, literary critic, and socialist propagandist, winner of the Nobel Prize for Literature in 1925. He is famous for his role in revolutionizing comedic drama. He wove threads of humor and romance between analyses of contemporary hypocrisies and social tensions. During his lifetime, he wrote more than 60 plays and won many other awards, among them the Nobel Prize.

Shaw started his school life attending the Wesley College, Dublin, a grammar school operated by the Methodist Church in Ireland. Then he moved to a private school near Dalkey and then transferred to Dublin’s Model School. When he was about 16, his mother left his father to teach singing in London. Shaw developed a wide knowledge of music, art, and literature as a result of his mother’s influence and his visits to the National Gallery of Ireland.

In 1876, he went to London to join his mother and he wrote five novels during his stay there. Among those novels, his first novel-“Immaturity” was completed in 1879. In 1895 Shaw began writing for the Saturday Review as a theatre critic, and from there he began to write his first plays. Shaw’s most financially successful work, Pygmalion, was adapted into the popular Broadway musical My Fair Lady. During the early 20th century, Shaw wrote his greatest and most popular plays. His first successful play “Arms and the Man” was published in 1894. “Man and Superman” -published in 1903 are the most outstanding of those plays. He was awarded Nobel Prize for Literature in 1925 for his contributions to literature.

He was a major international celebrity and a force in British politics, being a charter member of the Fabian Society. He was an extremely prolific writer who completed over fifty plays before his death of natural causes at the age of 94. Shaw’s complete works appeared in thirty-six volumes between 1930 and 1950, the year of his death.