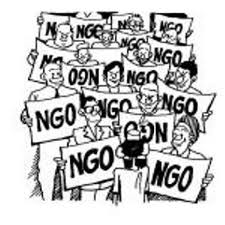 NGOs of Bangladesh have increasingly become subject to criticism about their role and functions, by the government, political parties, professionals and public in general.NGO maintains its non-governmental status by excluding government representatives from membership in the organization.

Criticisms of NGOs are:

i) NGOs are taking funds from various donor agencies. Though they operate within the legal framework of the country, in most cases they are accountable to the donor agencies rather than Government of Bangladesh.

ii)Political parties, particularly the; leftist parties, critic’s NGOs for taking funds mostly from western donors and from the national institutes of the capitalistic governments. Leftist parties argue that this is one kind of patron-client relationship, which increases dependency and hinders social revolution.

iii)The most serious allegation against the NGOs is that in spite of hundreds of NGOs working in Bangladesh for years together, yet the reduction of poverty is not visible. Rather poverty is increasing day by day while in the name of helping poor people the number of millionaire is increasing every year.

v) Some NGOs are related with politics, which is against law.

VI)  NGOs those receiving funds exclusive from Christian church organizations accused of conversion. If any NGO is involved in such activities government should take action rather than accusing all NGOs (Task Force Report: 1991).

VIII)   NGOs are accused of area biased. They have concentrated themselves in the thanes nearer to Dhaka. As a reason, people of these areas are getting benefits from different sources, while people of other remote areas are deprived of those resources.

IX)NGOs are working with the government without having any coordination among them. It creates duplication of activities and wastages of money.