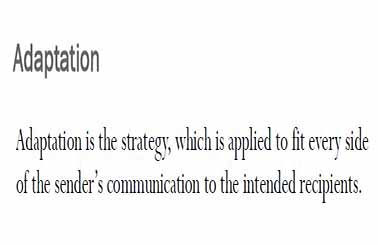 Adaptation and the Selection of Words

Adaptation and the Selection of Words

Adaptation is the strategy, which is applied to fit every side of the sender’s communication to the intended recipients.

Clear writing begins with adapting the message to the contexts of the readers/receivers.

“…the excess of the investments in certain companies over net asset value at dates of acquisition was taka Taka 15,000. The company’s equity in net assets as of December 31, 2005 was Taka 25,000 and in the results of the operations…”

Three reasons justify the use of simplicity in writing:

Using the simplest words that carry the meaning without offending the readers’ intelligence.

Using Slang and Cliché with Caution

Cliché is an everyday expression, often a figure of speech whose effectiveness has been worn out through overuse and excessive familiarity.

Short words communicate better than long words, though all short words are not easy to understand.

The decision was predicated on the assumption that an abundance of monetary funds was forthcoming.

The decision was based on the belief that there would be more money.

Technical Words: The words that are used in any specific field or area. For example, words or terms in finance, medicine, architecture, law; etc.

Direct Cost is the technical word, which is more familiar to individuals working in the area of accounting.

Acronyms: Acronym is the brief version of a collection or set of interrelated words.

BIDS is the acronym of the Bangladesh Institute of Development Studies.

Concrete words are those, which form sharp, clear, and specific meanings in the mind of the readers.

Abstract words are vague and have more generalized meaning.

The leading company   First among 50 companies

Overuse of the verb “to be” and “Passive voice” take away the strength of the language.

“…customer service officers’ main tasks are to receive complaints, and to give answers to questions.”

“…customer service officers receive complaints, and give answers to questions.”

The product will be introduced by the XYZ Company.

An increase of 20.50 percent was reported for hardware sales.

The XYZ Company will introduce the product.

A verb describing the action in a sentence takes the form of a noun is termed as camouflaged verb.

An arrangement was made to meet for breakfast.

We arranged to meet for breakfast.

Acceptance of all orders must be made by the chief.

The chief must accept all orders.

Use of correct Idioms:

If a customer pays promptly, he is placed on our preferred list. (Gender-Biased)

A customer who pays promptly is placed on our preferred list. (Gender-Neutral)

If customers pay promptly, they are placed on our preferred list. (Gender-Neutral)

If a customer pays promptly, he or she is placed on our preferred list. (Gender-Neutral)

Three Ways Can Be Applied…

 Reword the sentence to eliminate the gender-biased words.

 Make the reference to any gender plural.

 Substitute any of a number of neutral expressions such as he or she, he/she, you, one, and person.

Words depicting minorities in a stereotyped way are unfair and untrue.

Words that present members of minorities as exceptions to stereotypes are also unfair.