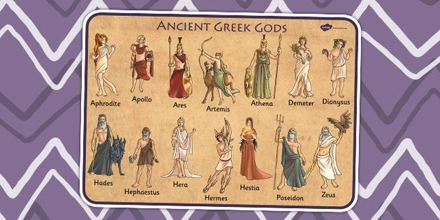 The gods were not the first rulers of the universe. Legends say that the Titans ruled the universe first. Some renowned Greek Gods are: Zeus; Hera; Poseidon; Demeter; Ares; Athena; Apollo; Artemis etc. Cronus, the top titan, used to eat his children for fear of losing power. Zeus managed to keep from being eaten and killed Cronus, thus beginning the reign of the gods. Hera: Queen and mother of the gods. Ares: God of war. Aphrodite: Goddess of love and beauty.