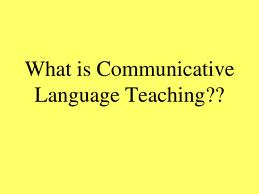 “One of the most characteristic features of the Communicative Language teaching is that it      pays systematic attention to functional as well as structural aspects of language.”

According to Richards and Rodgers (1986: 66), it means using procedures where learners work in pairs or groups employing available language resources in problem solving tasks.

The structural view of language concentrates on the grammatical system, describing ways in which linguistic items can be combined. The structural view of language has not been in any way superseded by the functional view.  However, it is not sufficient on its own to account for how language is used as a means of communication. Just as a single linguistic form can express a number of functions, so also can a single communicative function be expressed by a number of linguistic forms (Littlewood 1981:1-2).

As mentioned in “Richards and Rodgers (1986: 66)” we come to know that in her discussion of communicative syllabus design, Yalden (1983) discusses six Communicative Language Teaching design alternatives, ranging from a model in which communicative exercises are grafted onto an existing structural syllabus, to a learner-generated view of syllabus design (e.g. Holec 1980).

Richards and Rodgers (1986: 66) states that Howatt (1984) distinguishes between a “strong” and a “weak” version of Communicative Language Teaching:

There is, in a sense, a “strong” version of Communicative approach and a “weak” version. The weak version which has become more or less standard practice in the last ten years, stresses the importance of providing learners with opportunities to use their English for communicative purposes and, characteristically, attempts to integrate such activities in to a wider program of language teaching…..The “strong” version of Communicative teaching, on the other hand, advances the claim that language is acquired through communication, so that it is not merely a question of activating an existing but inert knowledge of the language, but of stimulating the development of the language system itself. If the former could be described as ‘learning to use” English, the latter entails ‘using English to learn it.”  (1984 : 279)