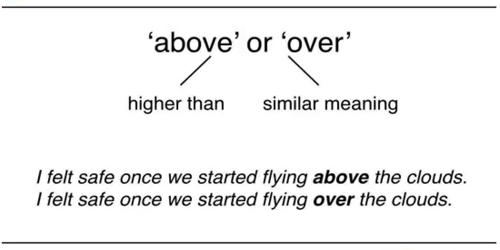 Difference between Above and Over

When we use ‘above’ as a preposition, it means ‘higher than’. Its meaning is close to that of the preposition over. The words ‘above’ and ‘over’ are both prepositions and adverbs which are used to describe the position of any person or object and also when we discuss measurements, i.e. a level which is higher than another level on a scale. Both above and over is used to indicate the location of something which is at a higher position, however, ‘over’ expresses the location in a precise manner, in the sense that it indicates movement of the object from one side to another. When something is above something else, i.e. the first thing is directly perpendicular to the latter, then we use over to indicate the position.

In the first sentence, you are describing how high the eagle was flying. Where was it flying? Above the trees. In the second, you’re describing where the eagle went. Where did it go? Over the trees. Not much distinction and nobody would question which you used, for either. Both basically mean “higher than” but it is often unclear for learners of English what the difference between above and over is.

Difference between Above and Over