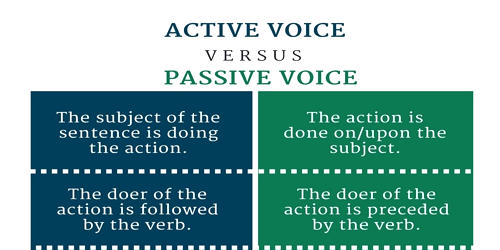 In English grammar, verbs have five properties: voice, mood, tense, person, and number; here, we are concerned with voice. In English Grammar, Voice is used to decide whether the verb is working actively or passively in a sentence. In this way, there are two broad classifications of voice, i.e. active voice and passive voice. An active voice means that a sentence has a subject that acts upon its verb. Passive voice means that a subject is a recipient of a verb’s action. The active voice describes a sentence where the subject performs the action stated by the verb. With passive voice, the subject is acted upon by the verb.