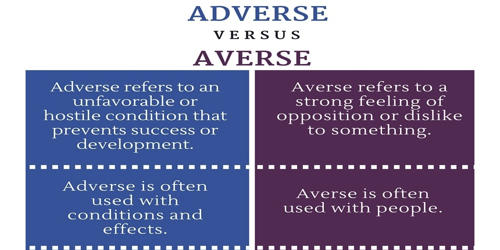 Difference between Adverse and Averse

The two words adverse and averse are related in origin but they do not have the same meaning. Adverse and averse are both turn-offs, but adverse is something harmful, and averse is a strong feeling of dislike. The words adverse and averse are derived from a Latin term, which is one of the frequently confused pairs of homonym. Adverse describes something that works against you, like a tornado or a computer crash, and is usually applied to things. Adverse, usually applied to things, often means “harmful” or “unfavorable” and is used in instances like “adverse effects from the medication.” However, their meanings are quite different, in the sense that adverse is used to point out something which is unfavorable, conflicting, detrimental, or unfriendly.

On the other hand, averse is used to denote something which is unwilling, reluctant, loath, or opposing by nature. Averse is usually applied to feelings, attitudes, or people. It’s a strong feeling of opposition — it’s a big “no thanks” and it’s often followed by to. While the word ‘averse’ is often followed by the preposition ‘to’, adverse is not followed by any such proposition.

Difference between Adverse and Averse