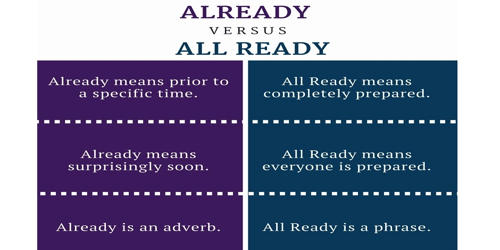 Difference between Already and All ready

The terms “already” and “all ready” sound identical and are sometimes confused. “All ready” means “completely prepared.” “Already” means “prior to a specified or impli[pd time.” Already vs All ready‘Already and All ready’ often confuses us because of their similar pronunciation, however, if you analyze deeply, they are two different words. ‘Already‘ is used in the context of an event which is happened previously. The word “already” is an adverb meaning “prior to a specified or implied time” or “as early as now.”  On the other hand, ‘all ready‘ means fully prepared for something. The term “all ready” means “completely prepared.” It is slightly more emphatic than just “prepared.”

The word ‘already’ is an adverb, whereas the term ‘all ready’ is a phrasal adjective. We use already with positive and interrogative sentences only, but all ready can be used with all kinds of sentences, including the negative ones.

Difference between Already and All ready –