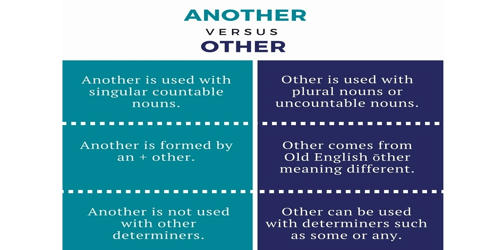 Difference between Another and Other

The words another and ‘other’ mean the same thing, except that another is used with a singular noun and ‘other’ is used with uncountable and plural nouns. Another and other both come under the category of indefinite pronoun, that does not directly point out any other object or person. Example: She’s going to the cinema with another friend. She’s going to the cinema with other friends. While another can be used as a determiner and pronoun, ‘other’ can be used as a determiner, pronoun, and adjective.

These are commonly juxtaposed, due to a little bit of similarity in their meanings. However, they are distinct in the sense that another means additional person or object, which can be similar to or different than the one you already have. When we use ‘an’ before ‘other’, we write it as one word: another. On the other hand, ‘other’ also means extra or more, person or thing, except the one that you already stated, i.e. remaining. Other is an adjective meaning ‘different’ or ‘the second of two items’.

Difference between Another and Other –