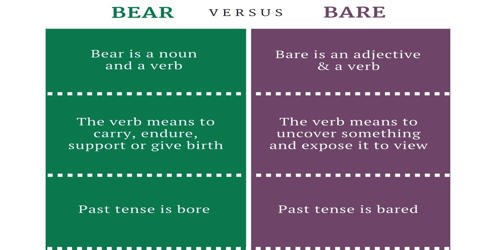 Difference between Bear and Bare

Homophones sound the same but are spelled differently. The words ‘bear’ and ‘bare’ are homonyms that are pronounced exactly similar, but they are spelled differently and also differ in their meanings. While the word ‘bear’ has multiple meanings, ‘bare’ has only one meaning. Bare means naked, but to bear is to carry something. A bear is also a brown furry animal, but most people keep that one straight.

Bare functions as an adjective or a verb. As an adjective, it can mean minimal, naked, uncovered, or without supplies. The verb bare means to reveal or open something to view. When something is not properly clothed or covered, we mean ‘bare‘. On the other hand, ‘bear‘ usually refers to tolerate or carry something.

Difference between Bear and Bare