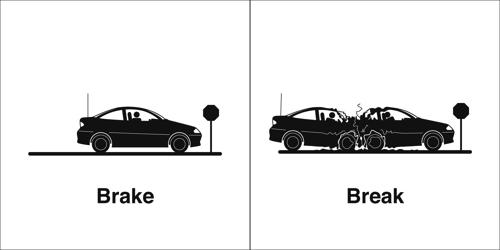 Difference between Break and Brake

The English language is filled with a difficult and puzzling type of words. One of the types of words is homophones that are pronounced the same way but mean and spell differently. The homonyms break and brake are so similar in their pronunciation that sometimes it is really hard to identify which one is used in a sentence. Further, when it comes to their spelling, it resembles a great extent. Break means to tear something into pieces either by a hit or drop. On the contrary, the brake is nothing but a device that is used for slowing down the speed or stopping the vehicle.