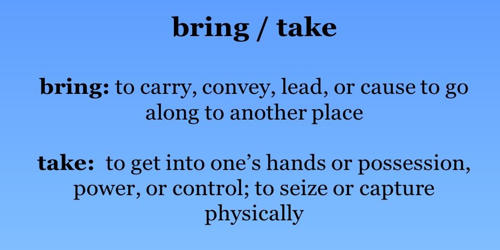 Difference between Bring and Take

“Bring” and “take” are two verbs that often appear on lists of commonly confused words. The words, bring, and take both are examples of irregular verbs, as they do not have a regular -ed ending in their past forms. They both mean that something, or someone, is changing its location with the help of another thing or person. These two are very commonly misconstrued, but they cannot be used interchangeably, as their meanings are diametrically opposite. Bring means to carry or transfer something from one person or place to another.

On the other hand, take means to hold something with hands or to accept/get something from another person. The essential difference between these two words is that bring implies movement towards someone or something: Bring your instrument with you when you come over. Whereas take implies movement away from someone or something: Take your belongings with you when you’re leaving. Both the words bring and take are related to the movement of something, but bring implies carrying or having something along with you, whereas take denotes carrying or having something away with you. The verbs bring and take have many different meanings, especially as phrasal verbs.

Difference between Bring and Take