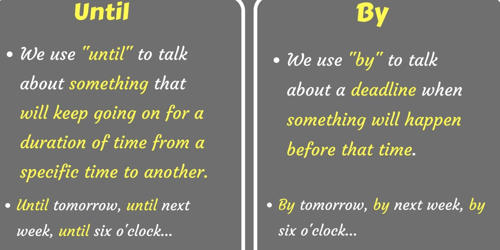 Difference between By and Until

By and until can be easily confused. Prepositions are the words that precede a noun or a pronoun to show the relation or connect it to another element within the sentence. “By” is used to describe an action or event that happens on or before a particular moment. By and Until are the two prepositions of time, which are commonly misinterpreted. They are used differently and after a little studying, you should have no problems using them. However, the preposition ‘by‘ acts as a deadline in a sentence, indicating the time up to which something must be done or completed.

On the contrary, the word ‘until‘ focuses on the period, before the deadline. “Until” is used to describe a state or situation in a period of time up to a particular moment. You may think of “until” as referring to the moment a state or situation changes.
E.g. Comments on the draft may be submitted until (date).

Difference between By and Until

“By” refers to a deadline. We usually use the verbs “must”, “need”, or “have” when we make sentences with “by”. We use “until” to refer to a period of time in which something happens or is possible. We usually use the words “can”, “will”, or any present tense verbs with “until”.