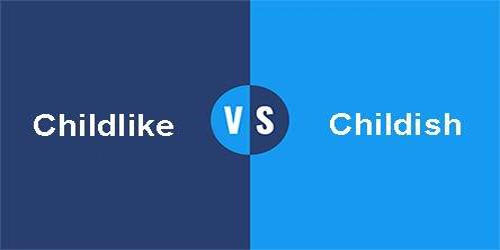 Difference between Childish and Childlike

As the word ‘childish‘ is commonly used in a negative sense, i.e. to disparage someone. On the other hand, ‘childlike‘ is a positive compliment given to someone, for having good qualities similar to a child. Let’s have a look at the example given below to understand the difference between them:

No one likes her childish behavior, but everyone praises her childlike honesty.

In the given example, you might have observed that the word ‘childish’ is unflattering, as it is something which people find annoying and irritating. As against, the word ‘childlike’ is used in a good sense, to appreciate the qualities of a person, that resembles a child. Childlike is a softer word and can have a positive quality.

Those are two very different statements to make. Childish is difficult to use in a positive way. It’s a denigrating statement to make.

Difference between Childish and Childlike