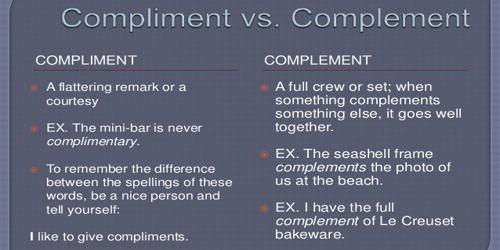 Difference between Compliment and Complement

Compliment and complement are homophones, which means that they have the same pronunciation but different spellings and meanings. The words compliment and complement are highly confusing homonyms, not only because of their pronunciation, but their spelling is also nearly the same, due to which we end up using them incorrectly. Compliment can be either a verb or noun that relates to praising someone or saying something nice about someone.

However, their meaning is very different, and so we should apply these words intelligently especially in written English, or else, the entire message will be misinterpreted. When someone gives you a positive comment, it is known as a compliment. Complement can also be either a noun or a verb. It relates to something that completes another thing, or something that goes well with another thing. On the other hand, when two things appear or perform better together, i.e. when something goes well with another one, we use the word complement.

Difference between Compliment and Complement