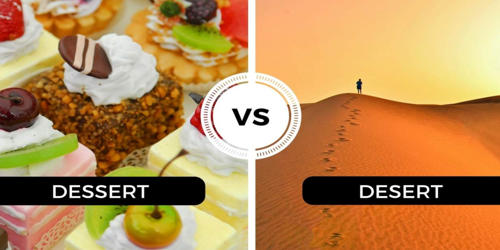 Difference Between Desert and Dessert

Desert and dessert are two commonly confused words in the English language. They often look alike, but there is a slight difference in their spelling, meaning, and even pronunciation. Desert is a noun that means a large, dry area with few plants. Desert implies a hot and sandy region, where there is a lack of water, due to which life is quite difficult there. Many deserts are full of sand dunes and have very few animals living in them. It may also mean to run away from a situation. On the contrary, Dessert is a noun that means the sweet thing you sometimes eat after dinner, like fruit, ice cream, or cake. It implies a sweet cuisine, which is usually eaten after lunch or dinner.

The examples given below will help you to understand the difference between these two:

After having dessert, the group decided to visit the Thar desert.

When the function is over, dessert is served to all the guests and after an hour or so, everyone deserted the hall.

In these two examples, you might have observed that the word dessert has only one meaning in both the sentences, i.e. the confectionary item. As against, desert in the first example means the vast arid region, whereas in the second case, it means to leave (left).

Difference Between Desert and Dessert