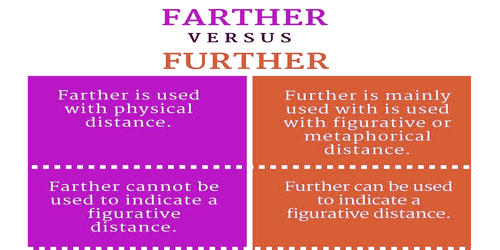 Difference between Farther and Further

People use both further and farther to mean “more distant.” Although they are often used interchangeably, “further” and “farther” don’t have exactly the same meaning. The word farther is an adverb form of far, which is used to express the distance between two entities or objects by comparing them. Basically, “farther” refers to actual distances between objects while further refers to figurative distances or something that is additional or more.

Farther is often contrasted with the word further when we talk of spatial distance. Both father and further can be used as adverbs and adjectives, but further can also be used as a verb to mean assist in progress or development. Further, is commonly used to denote distance in a non-literal sense, i.e. when it is only imaginable but not measurable. It may also mean, additional or more.

Difference between Farther and Further