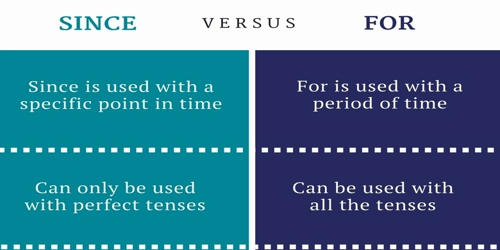 Difference between For and Since

Knowing when to use FOR and when to use SINCE is important. In English, we use the preposition ‘for’ to talk about an amount of time or space. We use ‘since’ to refer to a point of time. Since can refer to a point after a specific time or event in the past. We often get confused between the prepositions, for, and since, as both of these two are used to talk about how long the action continues. The words for and since are used in sentences where the speaker wants to talk about something that started in the past and continues into the present.

However, these two are different in the sense that ‘since’ is used when we are talking about a specific point in time, whereas ‘for’ is used when we discuss the duration of something. ‘Since’ gives the starting point of actions, events, or states. It refers to when things began. While ‘for’ represents a specific period or duration of time ‘since’ is used to denote a particular moment in time.

Difference between For and Since