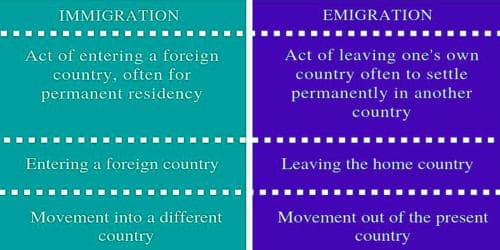 Difference between Immigrate and Emigrate

Emigrate means to leave one location, such as one’s native country or region, to live in another. Immigrate means to move into a non-native country or region to live. Migrate refers to a temporary movement of the animals or birds from one geographic location to another, due to seasonal changes. The words, immigrate and emigrate are originated from the word migrate, which also refers to the permanent movement of people. Emigrate is not an alternative spelling of immigrating. Emigrate means to leave a place, such as a country of origin, to settle in another location. The point of destination or arrival is important when we talk about immigration, but the point of departure is significant in the case of emigration.

The words immigrate and emigrate both lies under the umbrella term of migrate which means “to move from one place or country to another in the search of work or better living conditions.” Due to the very reason, there is a confusion with respect to their usage. An immigrant is “a person who has moved to another country, usually for permanent residence.” While immigrate means entering a new country and settling there permanently. An emigrant, on the other hand, is “someone who leaves a country or region.”

Difference between Immigrate and Emigrate –