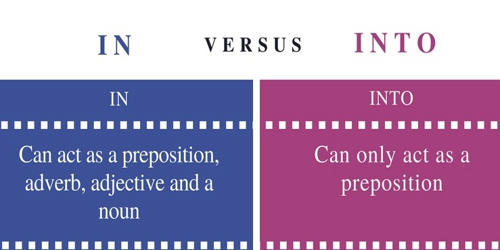 Difference between In and Into

The difference between ‘in’ and ‘into’ is whether or not there is movement. Many think that ‘in’ and ‘into’ are interchangeable, while this is not so, because their meanings are very different. The words “in” and “into” are both prepositions, and these terms can be confusing to use for English-language learners and native speakers alike. While we use ‘in’ to talk about the position of the object, ‘into’ is used when we are discussing the destination of the object. While the word ‘in’ can be used as a noun, adjective, adverb, and preposition, ‘into’ can only be used as a preposition.

Difference between In and Into –