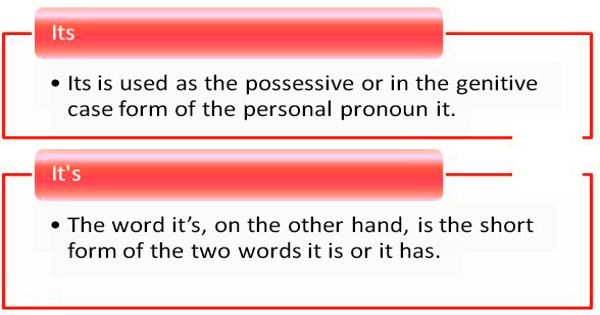 Difference between Its and It’s

‘It’s’ and ‘its’ are among the most commonly confused words. Contraction is the mixing of two words into a single word with the help of an apostrophe (‘) such as the words ‘it is’ are combined with an apostrophe and contracted as ‘it’s’. When you’re in a hurry, you might write “it’s” when you really mean “its,” or the other way around. ‘It’s’ is often confused with ‘its’ as they are pronounced similar but they appear differently as the latter does not have an apostrophe. “Its” and “it’s” are two distinct words with different meanings and different uses. Moreover, they differ in their meanings too, as in ‘its‘ represents ownership, whereas ‘it’s‘ is a short form of it is or it has.

Its is a possessive version of the pronoun ‘it’, that is used to show belongingness or ownership to something, which is either mentioned earlier or easy to relate. It’s is a commonly spoken form of the expression ‘it is’ or ‘it has’. While ‘its’ is nothing but an attributive adjective, it’s is a contraction. 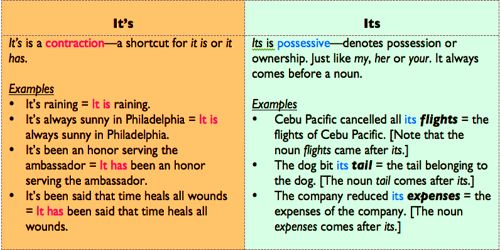 Difference between Its and It’s