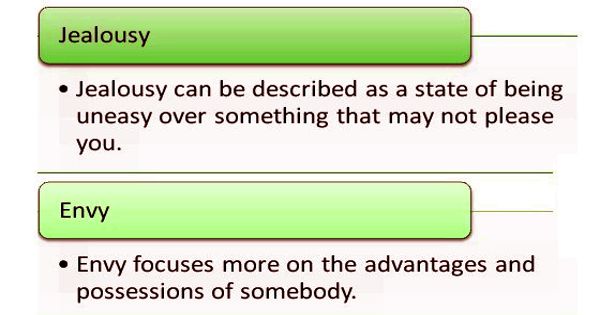 Difference between Jealousy and Envy

Jealousy and envy are great word choices to add color to your writing because they can capture how your characters feel. Someone has rightly said, “Jealousy and envy make you ugly.” Jealousy is a fear of losing something, envy is something, in which you want something possessed by someone else. Envy means discontented longing for someone else’s advantages. Jealousy means unpleasant suspicion or apprehension of rivalship. Jealousy can be felt over something that belongs to you. On the other hand, envy is felt over what you don’t have but covet.

Jealousy is a negative emotion, which only harms in some way or the other parties involved. Jealousy is a fear of losing something, envy is something, in which you want something possessed by someone else. Envy can also affect positively as it encourages one to improve or achieve something better.

In general, jealousy involves three-person but envy is a two-person situation. Jealousy is described as the feeling in which a person gets overprotective with respect to the rights, position, and possession. This typically happens in a significant relationship and requires three people (you, the significant person, and another). On the contrary, envy arises when one feels discontented due to the desire evoked by someone else’s quality, possession, achievements, etc. You could be envious of anything from a personality trait to a possession. Jealousy is best suited for human relationships whereas envy is appropriate for material objects, possessions, or status.

Difference between Jealousy and Envy 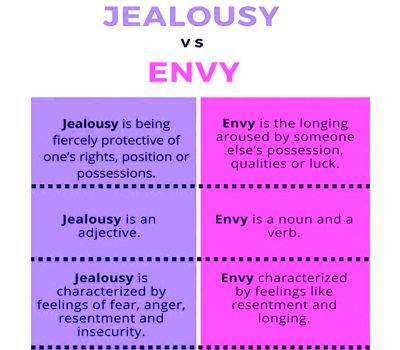