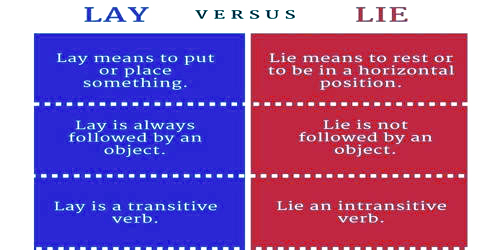 Difference between Lay and Lie

Lie and lay sound similar, they look similar, their meanings are similar, and don’t get us started on the similarities between their different tenses. Lay and Lie are such a pair of words, which are not only spelled differently but their pronunciation is also different. Still, they cause confusion in people due to some similarity in their meanings. You lie down, but you lay something down. Lay is used to put something down in a horizontal position. Lay requires a direct object.

On the contrary, Lie is used to put oneself in a horizontal position. ‘Lie’ does not require a direct object. It has one more meaning, i.e. to make an untrue statement. While lay represents an action that is under progress, lie talks about the position of a person, which is either reclining or changes into reclining position. A lie is an untruth. However, it’s the verb form of lie that people find difficult to distinguish from lay.

Difference between Lay and Lie –