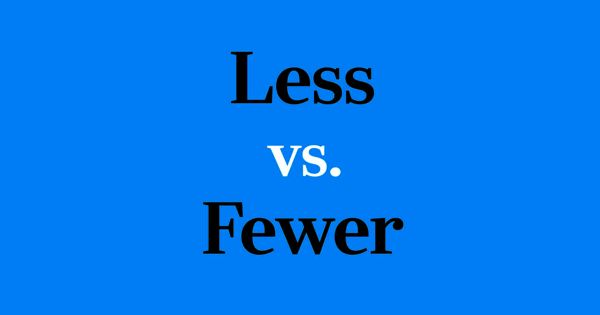 Difference Between Less and Fewer

The words “less” and “fewer” both mean the same thing; they are both the opposite of more. There’s a commonly repeated rule about fewer and less. Most of us do not understand where to use ‘less’ and ‘fewer’. These are the two comparative adjectives, which are used in a sentence, where a comparison of two entities is to be made. It goes like this: fewer is used to refer to number among things that are counted, as in “fewer choices” and “fewer problems”; less is used to refer to quantity or amount among things that are measured, as in “less time” and “less effort.”

We use quantifiers less and fewer to talk about quantities, amounts, and degrees. Less and fewer are comparative words. As both the two quantifiers mean a smaller amount of something, people get confused between the two easily. However, there is a difference between them, as in, you can use less when you are mentioning something which is uncountable or that does not have a plural. We use less, as a comparative form of the word little, whereas fewer can be used as a comparative form of few.

Difference Between Less and Fewer 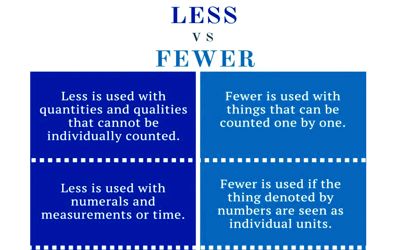