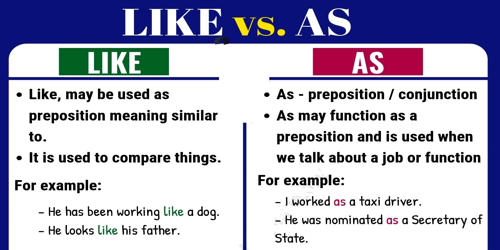 The confusion in using ‘like or as’ is caused by a lack of understanding of the words’ roles. In English, words ‘like and as’, are commonly interchanged and used synonymously. These two words are often confused.  However, they are not similar in their meanings, as we use the word ‘like‘ to mean something we enjoy or prefer to do, or for someone you admire. Use ‘like’ to state that someone is very similar to another. On the other hand, the word ‘as‘ is used to refer to the occupation or character of a person. ‘As’ is used to describe the function of a person or object.

Apart from these meanings, ‘like and as’ can also refer to ‘in the same way’ which often confuses people with respect to their usage in sentences. Let’s look at the example to understand their difference: Like your father, he wants you to succeed in your life. ‘As’ can also be used as a conjunction. ‘Like’, can be used as a Noun, Adjective, Adverb, Preposition, and Conjunction. 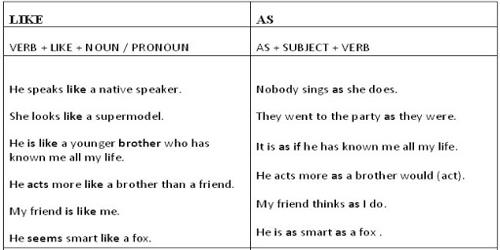