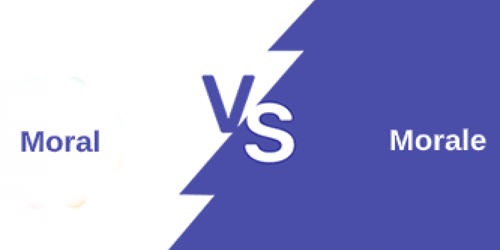 Difference between Moral and Morale

The words “moral” and “morale” look and sound similar, but their meanings are quite different. Moral and Morale are the pair of homonyms that not only sound similar, but their spelling also resembles a great extent. As a noun, a ‘moral’ is the lesson learned from a story – often used in the expression “the moral of the story.” Both of these words can function as a noun in a sentence, but only one of them can function as an adjective as well. Moral refers to the lesson or essence of the story or experience; it often talks about the principles of right or wrong conduct for society as a whole.

On the other hand, morale is used to describe someone’s spirit or degree of enthusiasm. Morale means the state of spirit/emotions of a group of people – their general confidence and cheerfulness. We put stress on the first syllable when we pronounce the word moral, but in the second syllable, when we pronounce ‘morale’.

Difference between Moral and Morale –