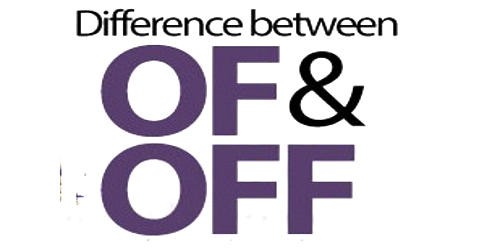 Difference between Of and Off

The words “of” and “off” are both prepositions. Many use the words ‘of’ and ‘off’ interchangeably, due to lack of knowledge about their meaning and usage. ‘Of‘ is a preposition that is used in sentences to show belongingness or possessiveness. “Of” is most commonly used to show possession (e.g., an uncle of Mr. Jones) or to show what something is made of (e.g., a wall of ice). It is commonly contrasted with the word ‘off‘ which is used when we mean ‘away from a person, object or place’. The word “off” is commonly seen as part of a phrasal verb, which is a single verb made up of more than one word.

Of is a preposition, which is used to show some connection with the other word, or part of the sentence. As against, Off is commonly used as an adverb, but it can also be used as a noun, verb, adjective, and preposition.  The word ‘off’ is added after the verb, to make it a phrasal verb, whereas we cannot make a phrasal verb, with the help of the word ‘of’.

Difference between Of and Off