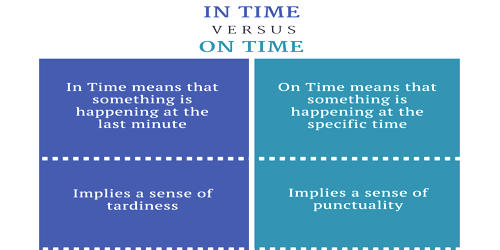 Difference between On time and In time

The difference between “on time” and “in time” is a subtle one, and the two expressions may sometimes be used interchangeably. In our day to day life, we make plans and schedule our activities, for which we often use the words on time and in time. These are often used interchangeably, but they are not one and the same thing, in the sense that ‘on time‘ is used to mean at the specific time, while ‘in time‘ means early enough. “In time” usually has an implicit “for (some event)”, whereas “on time” means “before some deadline”. ‘On time’ means at a particular designated time, i.e. neither especially early nor late. The train is scheduled to arrive on time at 13:36. ‘In time’ means early enough, i.e. before a deadline or another cutoff.

The opposite of the word ‘on time’ is late, whereas the opposite of ‘in time’ is ‘too late’. ‘On time’ means that there is a specific time established when something is supposed/expected to happen, and it is happening at the planned time. If we say we arrived ‘in time’, we’re saying that we got there a little early – that there was time to spare.

Difference between On time and In time