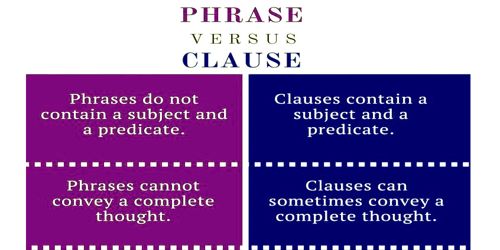 Difference Between Phrase and Clause

In English, there are two grammatical terms, that form part of a sentence which may or may not be meaningful. Clauses and phrases are two very different parts of a sentence but some of their similar features make it difficult for the learners of the English language to distinguish between the two. These are phrases and clauses, wherein the phrase implies a set of words, that acts as a single unit but does not have a subject and predicate. A phrase is a part of a clause or a sentence. As against, a clause is a sentence fragment.

Difference Between Phrase and Clause