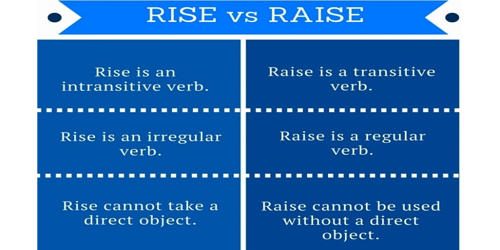 Difference between Rise and Raise

The verbs raise and rise both refer to something going “up”. The words ‘rise and raise’ commonly indicates an increase or improvement in anything. The main difference between them is that raise is transitive and rise is intransitive. However, they are not one and the same thing, as rise usually means growth or increment in something, whereas raise denotes to induce, elevate, or augment something. To raise means to lift or move something or someone upward. It also means to increase. To rise means to move upward or to increase. Hence, you can understand how close these words are, in terms of meaning.

Difference between Rise and Raise –