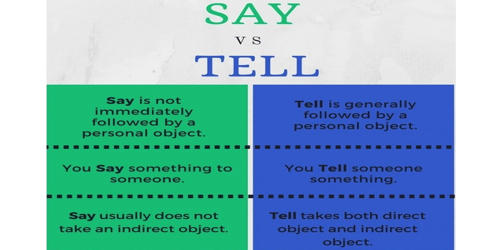 Difference between Say and Tell

Say and tell are irregular verbs. We use ‘say’ and ‘tell’ in different ways in reported speech. The words ‘say’ and ‘tell’ both are irregular verbs, as their past participle form, do not have a regular ‘ed’ ending, i.e. say becomes said and tell becomes told. While say can be used as a noun, verb, and interjection, tell can only be used as a verb. While the word ‘say‘ is used to utter something verbally, ‘tell‘ can be used to give information, give evidence or orders to a person. Tell is used only to instruct or inform, and when the receiver of the information is included as an object of the verb. “Say” and “tell” may have a lot in common, but their personalities are actually very, very different.

So, the first and foremost difference between these two is that we do not mention whom we are referring to, in the case of ‘say’, but we mention it in case of ‘tell’. Tell means “to give information to a person” – so tell (present) and told (past) are always followed by a person.

Difference between Say and Tell –