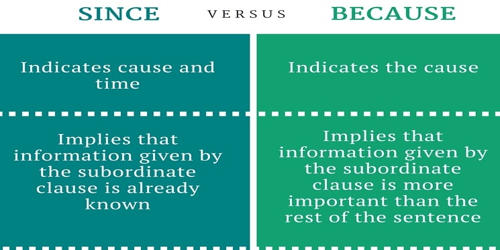 Difference between Since and Because

As, because and since are conjunctions. As, because and since all introduce subordinate clauses. Conjunctions are linking words, that are used in sentences to combine two words, clauses, phrases, or sentences. They connect the result of something with their reason. While “because” does imply cause, “since” can imply time or cause. The key difference between “Since” and “Because” lies in the fact that while the word “Since” means to refer a time from the past or to state a reason, on the other hand, “Because” means to imply a reason in the statement.

Since and because are two causal conjunctions, which tells you why someone does something. ‘Since‘ can be used in two different ways in a sentence, i.e. it either talks about ‘time’, or it gives the ‘reason for something’. On the contrary, ‘Because‘ refers to ‘by cause of’. Further, both in written and spoken English, because is more common than since when it comes to giving a reason. They are also easy to misuse or overuse, which is why it is important to know the differences between them and how to use each correctly.

Difference between Since and Because –