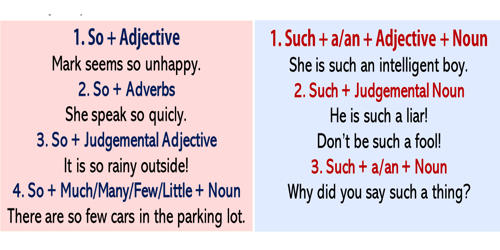 Difference between So and Such

Structures using ‘such’ and ‘so’ are similar in meaning, but different in construction. We often use ‘so’ and ‘such’ to mean ‘very’ or ‘really’. So and Such are the two words in the English language which are used to emphasize the meaning of the sentence. It makes the sentence stronger and shows that there is a high level of something. They are also used to mean ‘like this’. These words are not the same, because while ‘so‘ is used to indicate ‘the extent of something’, ‘such‘ is used to denote ‘of the aforementioned or certain kind or degree’.

Such is a determiner; so is an adverb. They often have the same meaning of ‘very’ or ‘to this degree’. The main difference between the two structures is that ‘such’ takes a noun phrase, whereas ‘so’ takes an adjective.

Difference between So and Such –