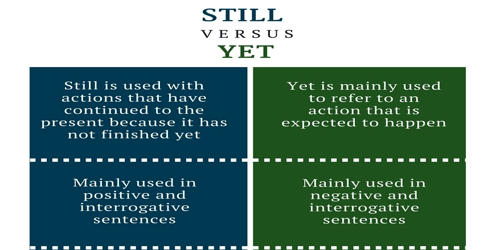 Difference between Still and Yet

Yet and still are used to talk about things that have (or haven’t) happened over time. Many think that still and yet often mean the same thing, but this is not the case. Their meanings and uses are distinct. However, there is a situation in which they are used in a similar way to convey a similar idea. Still talks about something which began in the past and it persists even now, as it is not completed or finished yet. The word still is used mainly to refer to something that began in the past and is continuing into the present.

On the other hand, yet refers to something which a person is longing for or expecting to start, complete, or happen by a certain time, but it does not happen, started, or completed until now. The word yet is mainly used to refer to something that a person is waiting for and expecting, but that hasn’t happened so far. Both yet and still can be used in negative statements to talk about something that wasn’t true in the past and continues not to be true in the present.

Difference between Still and Yet –