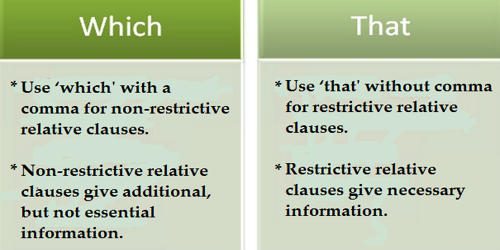 Difference between That and Which

To understand when to use that or which, it’s important to understand clauses. Clause implies a set of words that is a part of a sentence, but it contains its own subject and predicate. A defining clause gives information essential to the meaning of the sentence. A relative clause is a type of clause that expresses the person or thing, the speaker is referring to. We use ‘that’ to refer to people or things, whereas we use ‘which’ to refer to things only.

Basically, we use who, whose, whom, that and which, in relative clauses. By identifying your clauses as defining or non-defining, you can easily remember when to use which and when to use that. Many people suffer dilemma in using that and which in the sentences. While that is used to talk about things and sometimes about people, which is used to discuss things only.

Difference between That and Which –