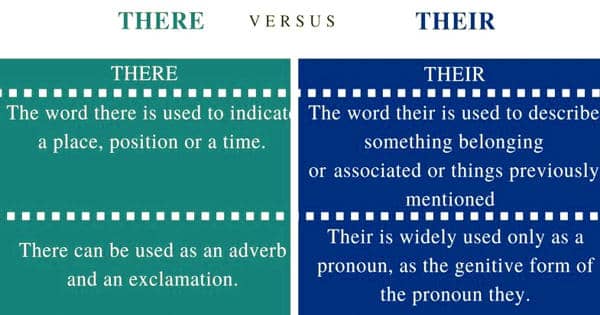 Difference between There and Their

The words ‘there’ and ‘their’ are often used incorrectly because they are homophones, due to which they sound similar but have different spelling and meaning. ‘There’ means the opposite of here; “at that place.” ‘Their’ means “belongs to them.” While the word ‘there‘ has a number of uses but it is commonly used to refer to a place, or something which exists whereas we use ‘their‘ to mean belongingness to a group of people. ‘Their’ is a possessive adjective that is used before a noun. It shows possession, that something belongs to them. Example: There must be something wrong with their behavior. You are going there for their well being.

Difference between There and Their