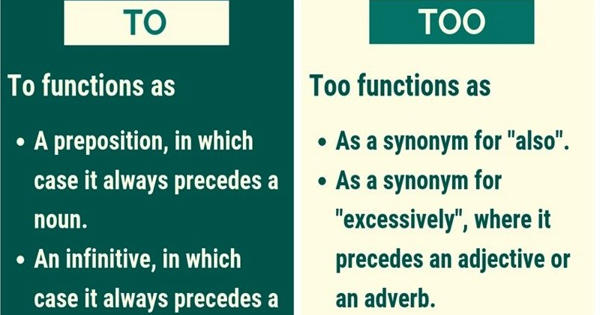 Difference between To and Too

The words ‘to’ and ‘too’ are homonyms, that have similar pronunciation but differ in their meanings, spelling, and origin. ‘To’ is a preposition with several meanings, including “toward” and “until.” While the word ‘to’ is used in sentences to denote direction. On the other hand, the word ‘too’ is used to indicate something of a high degree, also or very. ‘Too’ is an adverb that can mean “excessively” or “also.” The word ‘to’ is often followed by a noun and a verb. As against, too is used before an adjective or an adverb.

‘To’ is used in sentences to indicate motion in a specific direction. ‘Too’ refers to a greater extent, than what is required.

“To” acts as an adverb or a preposition. As an adverb, “to” indicates something is moving toward a wanted position or coming into awareness. “Too”, on the other hand, only acts as an adverb. It means “also” or “in addition.” While ‘to’ is a preposition that is used to show the relation between the subject with the element in the clause. As against, ‘too’ is an adverb, that is applied in sentences to modify the meaning of a verb or adjective and express a degree of something.

Difference between To and Too 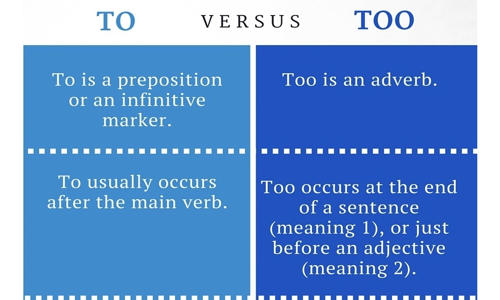