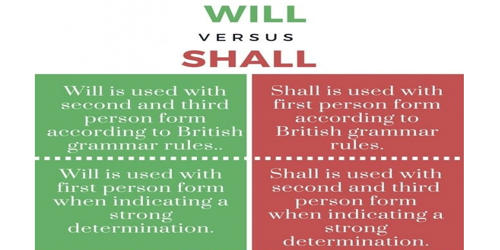 Difference between Will and Shall

Will and shall are modal verbs. In modern English will and shall are helping verbs. We all know that the words ‘will’ and ‘shall’ are used in the future tense, to indicate something which has not taken place yet, but it is going to take place in the coming time. They are used with other verbs but lack conjugations of their own. Many people don’t understand where we can use these helping verbs correctly in the sentences. As a general rule, use ‘will’ for affirmative and negative sentences about the future. While ‘will‘ is mainly used when you give an order, suggest something, announce a decision or to express willingness/ability to do something.

On the other hand ‘shall‘ is used in place of will, when we initiate action and also to ask something, to know the wish of another individual. If you want to make an offer or suggestion with I/we, use ‘shall’ in the question form. When the sentence expresses strong future intention or assertion, such as a promise, determination, or command, we use will with the first person and shall with the second and third person. Shall is only used for future time reference with I and we, and is more formal than will.

Difference between Will and Shall