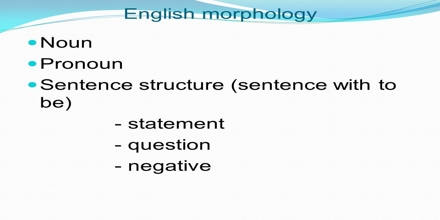 Basic purpose of this lecture is to present on Morphology of Nouns. Nouns change their form for only two grammatical reasons: Countable nouns have a plural form. This is usually formed by adding –s, of course, but there are some irregular forms. When we see a noun as performing a role in a sentence, we think of it as a noun phrase. A noun phrase may function as the subject or object of a clause. A noun phrase may consist of a single word (a noun or pronoun) or a group of words. The most important noun in a noun phrase is called the headword.