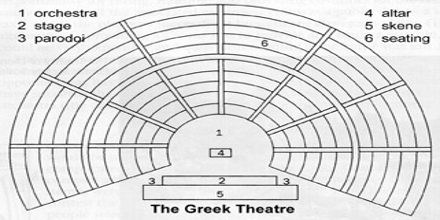 Three Main Portions of Greek Theatre: Skene; Orchestra and Theatron. Skene – Portion of stage where actors performed (included 1-3 doors in and out). Orchestra – “Dancing Place” where chorus sang to the audience. Theatron – Seating for audience. Greek plays were performed during religious ceremonies held in honor of Dionysus, the Greek god of wine and revelry. Banks would shut down for days, people would travel from all around to see the drama competitions—even prisoners were temporarily released to see the plays