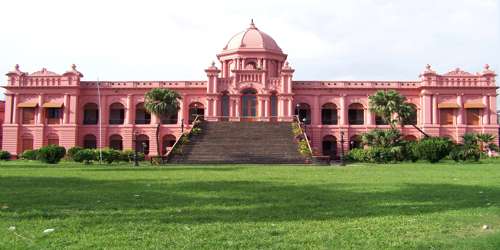 Ahsan Manzil is considered to be one of the most noteworthy architectural monuments in Bangladesh. This magnificent building is situated on the banks of the Buriganga River that flows beside Dhaka, the capital city of Bangladesh. Ahsan Manzil was previously the official palace of the Dhaka Nawab family and is currently a museum preserving the culture and history of the area.

It has been turned into a museum recently. It was said to be the Rang Mahal of Sheikh Enayetullah, a zamindar of Jamalpur pargana (Barisal) during the time of the Mughals. Having purchased it from his son Matiullah, the FRENCH made it their trading centre. Khwaja ALIMULLAH bought it from the French in 1830 and converted it into his residence, effecting necessary reconstruction and renovations. With changes in the political climate the Dhaka Nawab State fell away and financial constraints made it impossible for the successors of the Nawabs to maintain the huge palace buildings. Over the years, the palace was taken over by illegal occupants and became a slum. Fortunately, the government of Bangladesh recognized the architectural and historical value of Ahsan Manzil and in 1985 the building and its surroundings were purchased with the aim of a complete restoration. The renovations were completed in 1992 and Ahsan Manzil was established as a museum attraction.

The palace Ahsan Manzil is a two storied building. It is divided into two parts – 1.Rangmahal, the eastern building with the dome and 2.Andarmahal, the western side with the living rooms. The high octagonal dome is on the central round room. There are large drawing room, library, card room, state room and two other guest rooms in the eastern portion of the palace. There is ballroom, the Hindustani room and some residential rooms in the western portion. The drawing room and the Jalsaghar are decorated with a beautiful artificial ceiling made of wood. A grand dining hall and some smaller rooms are in the west part. Nice white, green and yellow colored ceramic tiles decorate the floors of the dining and Darbar Halls. The famous store-room, where Nawabs used to store their valuables, was in the middle of the five rooms located in the western half of the ground floor. Gallery 1: The brief description of Ahsan Manzil presented with photographs and pictures. There is a model of the building also.

Gallery 2: Evolution of the building ‘Ahsan Manzil’ is displayed with photographs here. There are Samples of cut-glass and Chandelier also.

Gallery 7: This large room was used as Darbar Hall. Oil paintings of all India Muslim leaders who came to join Shahbag Conference to form Muslim league in 1906 are being displayed in this gallery. Additionally, an octagonal table gifted to the Nawab of Dhaka from Italy is also being displayed here.

Gallery 8: Horns of various kinds of animals collected from Edward House. Various Sports Equipment of the then indoor and outdoor games.

Gallery 10: There are large cupboards, clay crocks which are signs of Nawab period.

Gallery 11: This gallery is arranged with portraits of eminent persons.

Gallery 12: This gallery is organized with the memory of Nawab Sir Salimullah.

Gallery 13: This gallery has been decorated with portraits of Royal contemporary great men.

Gallery 18 & 19: The symbols of Drinking Water Supply in Dhaka which were found in Ahsan Manzil and Edward House. There are also a few rare pictures of Dhaka Water Work.

Gallery 20 & 21: There was no electricity in Dhaka before 1901. Information about the arrangement of electricity by the Nawabs as well as clay crocks and flower vases of the royal period are being dispayed here.

Gallery 22: This gallery is in the first floor. Arms got from Ahsan Manzil are being displayed here. The high dome is located over this room.

Gallery 23: It was a Ballroom. It has been arranged according to pictures taken in 1904.