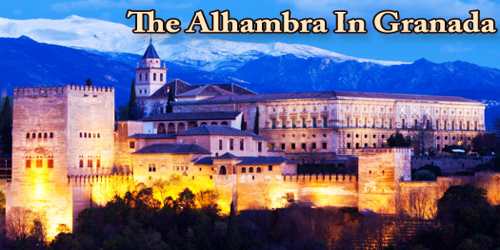 The Alhambra In Granada

The Alhambra (/ælˈhæmbrə/, Spanish: (aˈlambɾa); Arabic: الْحَمْرَاء‎, romanized: Al-Ḥamrāʾ, pronounced (alħamˈraːʔ), lit. “The Red One”), is a palace and fortress complex of the Moorish monarchs of Granada in southern Spain, occupying a hilly terrace on the southeastern border of the city of Granada. The eighth-century-old site was named for the reddish walls and towers that surrounded the citadel: al-qal’a al-hamra in Arabic means red fort or castle. It’s the only surviving palatine city (a royal territorial center) of the Islamic Golden Age and a remnant of the Nasrid Dynasty, the last Islamic kingdom in Western Europe. 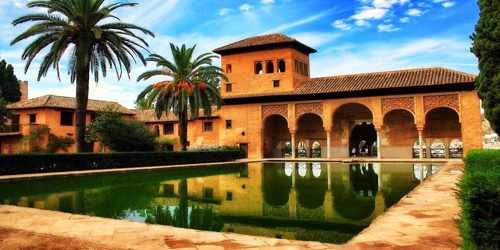 The Alhambra was originally constructed as a small fortress in AD 889 on the remains of Roman fortifications, and then largely ignored until its ruins were renovated and rebuilt in the mid-13th century by the Nasrid emir Mohammed ben Al-Ahmar of the Emirate of Granada, who built its current palace and walls. It was converted into a royal palace in 1333 by Yusuf I, Sultan of Granada.

Constructed on a plateau that overlooks the city of Granada, the Alhambra was built chiefly between 1238 and 1358, in the reigns of Ibn al-Aḥmar, founder of the Naṣrid dynasty, and his successors. The splendid decorations of the interior are ascribed to Yūsuf I (died 1354). After the expulsion of the Moors in 1492, much of the interior was effaced and the furniture was ruined or removed. Charles V, who ruled in Spain as Charles I (1516-56), rebuilt portions in the Renaissance style and destroyed part of the Alhambra in order to build an Italianate palace designed by Pedro Machuca in 1526. In 1812 some of the towers were blown up by a French force under Horace-François-Bastien Sébastiani during the Peninsular War (War of Independence), and the rest of the buildings narrowly escaped the same fate.

In 1821 an earthquake caused further damage to the complex. An extensive repair and rebuilding program was undertaken in 1828 by the architect José Contreras and endowed by Ferdinand VII in 1830. After the death of Contreras in 1847, his son Rafael continued his work for nearly four decades. Upon Rafael’s death in 1890, he was succeeded by his son, Mariano Contreras Granja (died 1912). Additional restoration and conservation work continued through the 21st century.

Alhambra’s last flowering of Islamic palaces was built for the last Muslim emirs in Spain during the decline of the Nasrid dynasty, who were increasingly subject to the Christian Kings of Castile. After being allowed to fall into disrepair for centuries, the buildings occupied by squatters, Alhambra was rediscovered following the defeat of Napoleon, who had conducted retaliatory destruction of the site. The rediscoverers were first British intellectuals and then other north European Romantic travelers. It is now one of Spain’s major tourist attractions, exhibiting the country’s most significant and well-known Islamic architecture, together with 16th-century and later Christian building and garden interventions.

The Alhambra was listed as World Heritage Sites by UNESCO in 1984. The selection was based on the following criteria: That it represents a masterpiece of human creative genius; it exhibits an important interchange of human values; and it is an outstanding example an architectural ensemble which illustrates a significant stage in human history.

Alhambra derives from the Arabic الْحَمْرَاء al-ḤB Hhjtamrāʼ, meaning “the red one”, the complete form of which was الْقَلْعَةُ ٱلْحَمْرَاءُ al-Qalʻat al-Ḥamrāʼ “the red fortress (qalat)”. The “Al-“ in “Alhambra” means “the” in Arabic, but this is ignored in general usage in both English and Spanish, where the name is normally given the definite article.

The Alhambra is located on a strategic point, with a view over the whole city and the meadow (la Vega), and this fact leads to believe that other buildings were already on that site before the Muslims arrived. The complex is surrounded by ramparts and has an irregular shape. It limits with the valley of the river Darro on its northern side, with the valley of al-Sabika on its southern side and with the street Cuesta del Rey Chico on the eastern side. The Cuesta del Rey Chico is also the border between the neighborhood of the Albaicin and the gardens of the Generalife, located on top of the Hill of the Sun (Cerro del Sol).

Moorish poets described it as “a pearl set in emeralds”, an allusion to the color of its buildings and the woods around them. The palace complex was designed with the mountainous site in mind and many forms of technology were considered. The park (Alameda de la Alhambra), which is overgrown with wildflowers and grass in the spring, was planted by the Moors with roses, oranges, and myrtles; its most characteristic feature, however, is the dense wood of English elms brought by the Duke of Wellington in 1812. The park has a multitude of nightingales and is usually filled with the sound of running water from several fountains and cascades. These are supplied through a conduit 8 km (5.0 mi) long, which is connected with the Darro at the monastery of Jesus del Valle above Granada. 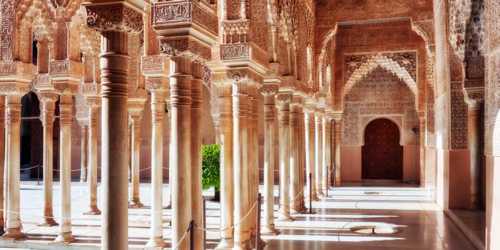 The terrace or plateau where the Alhambra settles, measures about 2,430 feet in length by 674 feet at its greatest width, extends from W.N.W. to E.S.E., and covers an area of about 169,831 square yards. It is enclosed by a strongly fortified wall, which is flanked by 13 towers. The river Darro, which flows through a deep ravine on the north, divides the plateau from the Albaicín district of Granada; the Assabica valley, containing the Alhambra Park, on the west and south, and beyond this valley the almost parallel ridge of Monte Mauror, separate it from the Antequeruela district.

The lower entrance to the park is the Puerta de las Granadas (Gate of Pomegranates), a massive triumphal arch dating from the 16th century. Just inside the gate is a statue of American author Washington Irving, which was erected in 2009, on the 150th anniversary of Irving’s death, to commemorate his role in sparking interest in Spain’s Moorish past. A steep ascent leads past a fountain, erected in 1554, to the main entrance of the Alhambra. This is the Puerta Judiciaria (Gate of Judgment), a horseshoe archway surmounted by a square tower, which was used by the Moors as an informal court of justice. The Moorish portion of the Alhambra includes the Alcazaba, or citadel, which is the oldest part; only its massive outer walls, towers, and ramparts are left. Beyond the Alcazaba is the Alhambra palace and beyond that the Alhambra Alta (Upper Alhambra), which was originally tenanted by officials and courtiers and was part of a royal city constituting a seat of government.

Alhambra was extended by the different Muslim rulers who lived in the complex. However, each new section that was added followed the consistent theme of “paradise on earth”. Column arcades, fountains with running water, and reflecting pools were used to add to the aesthetic and functional complexity. In every case, the exterior was left plain and austere. Sun and wind were freely admitted. Blue, red, and a golden yellow, all somewhat faded through lapse of time and exposure, are the colors chiefly employed. The name Alhambra means the red one or the red castle, which refers to the sun-dried bricks that the outer wall is made of.

The castle of the Alhambra was added to the city’s area within the ramparts in the 9th century, which implied that the castle became a military fortress with a view over the whole city. In spite of this, it was not until the arrival of the first king of the Nasrid dynasty, Mohammed ben Al-Hamar (Mohammed I, 1238-1273), in the 13th century, that the royal residence was established in the Alhambra. This event marked the beginning of the Alhambra’s most glorious period.

The Alhambra was built with its own special type of column, which is not used in any other building. This column has a very fine cylindrical shaft, the base of which has a big concave moulding and is decorated with rings on the top part. The capital is divided into two bodies and the first one, cylindrically shaped, has a very simple decoration and a prism with a rounded-angled base and stylized vegetal forms as decoration. 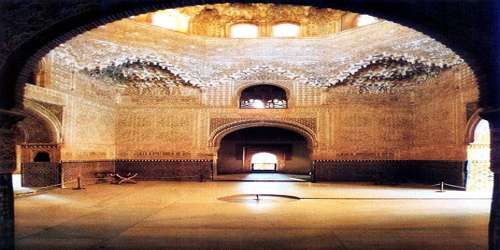 (Hall of the Two Sister)

The design included plans for six palaces, five of which were grouped in the northeast quadrant forming a royal quarter, two circuit towers, and numerous bathhouses. Over the reign of Nasrid Dynasty, the Alhambra was transformed into a palatine city complete with an irrigation system for the lush and beautiful gardens located outside the fortress. The creation of the “Sultan’s Canal” solidified the identity of the Alhambra as a sumptuous palace-city rather than a defensive and ascetic structure.

Along with the Alhambra, two associated sites in Granada the Albaycin and the Generalife were also selected in 1984 for World Heritage status. According to UNESCO, “Rising above the modern lower town, the Alhambra and the Albaycín, situated on two adjacent hills, form the medieval part of Granada. To the east of the Alhambra fortress and residence are the magnificent gardens of the Generalife, the former rural residence of the emirs who ruled this part of Spain in the thirteenth and fourteenth centuries. The residential district of the Albaycín is a rich repository of Moorish vernacular architecture, into which the traditional Andalusian architecture blends harmoniously.”

The Alhambra remains one of the most beautiful historical sites in Spain and is visited each year by thousands of tourists from around the world.