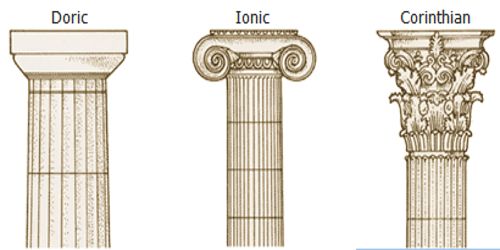 The Greeks developed three architectural systems, called orders, each with their own distinctive proportions and detailing. The Greek orders are: Doric, Ionic, and Corinthian.

The Doric style is rather sturdy and its top (the capital), is plain. This style was used in mainland Greece and the colonies in southern Italy and Sicily.

The Ionic style is thinner and more elegant. Its capital is decorated with a scroll-like design (a volute). This style was found in eastern Greece and the islands.

The Corinthian style is seldom used in the Greek world, but often seen on Roman temples. Its capital is very elaborate and decorated with acanthus leaves. Temple of Apollo at Didyma

Most ornate of the classic orders of architecture. It was also the latest, not arriving at full development until the middle of the 4th cent. B.C. The oldest known example, however, is found in the temple of Apollo at Bassae (c.420 B.C.). The Greeks made little use of the order; the chief example is the circular structure at Athens known as the choragic monument of Lysicrates ( 335 B.C.). The temple of Zeus at Athens (started in the 2d cent. B.C. and completed by Emperor Hadrian in the 2d cent. A.D.) was perhaps the most notable of the Corinthian temples. Work began on the Parthenon, built on the Acropolis, in 447 BC to replace an existing temple which was destroyed by the Persians in 480 BC and cost 469 silver talents to build. The work began under the orders of Pericles to show the wealth and exuberance of Athenian power. The name of the building most likely came from a cult statue of Athena Parthenos housed in the eastern room of the building. This magnificent structure was built of ivory and gold and was sculptured by the renowned sculptor Phidias. As with most buildings on the Acropolis it was dedicated to Athena to thank the Goddess for their success. The Parthenon was finally finished in 432 BC and was to show the world the dominance and power of Athens. The vast majority of the money used in the construction came from the Delian League funds. The Delian League was a treaty between the Greek states in league against the Persian Empire. However two years before work started on the Parthenon, the Athenians had struck a peace treaty with the Persians ending the war, although the League continued to exist. It is believed that because of this the league stopped being a mutual defence against Persia but part of the Athenian Empire. This theory was reinforced when Athens moved the Leagues treasury from the Pan-Hellenic sanctuary at Delos to the Parthenon (Opisthodomos room). Not only was the Parthenon a magnificent structure to look at, but it also showed Athenian dominance over the rest of the Greek peninsula and that Athens was its Greek imperial master.