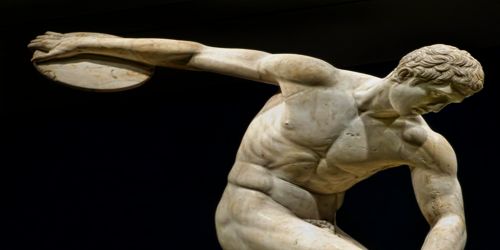 The Classical period witnessed a rapid improvement in Greek statuary. There was a dramatic rise in the technical skills of Greek sculptors in their ability to depict the human body in a relaxed rather than rigid posture. In the early 5th century Greek artists began consciously to attempt to render human and animal forms realistically. This entailed careful observation of the model as well as understanding the mechanics of anatomy – how a body adjusts to a pose which is not stiffly frontal but with the weight shifted to one side of the body, and how a body behaves in violent motion. The successors to the archaic kouroi, mainly athlete figures, are thus regularly shown ‘at ease’, one leg relaxed, with a complementary shift in the shoulders, and the whole emphasized by contrasts of rigid and relaxed in limbs.

Classicism improved on the rigidity of the Archaic idiom and brought a more natural sense of movement and corporeality to the human figure, as exemplified, for instance, in the metopes and pediments of the Temple of Zeus at Olympia. Also, bronze became the predominant medium for monumental free-standing statues, not least because of the metal’s ability to hold its shape – no matter how complex – which enabled the creation of less rigid poses. As well as being stronger and lighter, a bronze figure could be stabilized by placing lead weights inside its hollow feet. Classicist sculpture continued to be primarily connected with religion, and included the full panoply of Greek divinities and mythological figures. Thus, in addition to the twelve Olympian Gods and Goddesses – Zeus, Apollo, Poseidon, Demeter, Hera, Artemis, Hephaistos, Athene, Ares, Aphrodite, Hermes, and Hestia – sculptors carved minor divinities such as, Dionysos, and his cycle of satyrs, nymphs and centaurs; Pluto and Persephone; Eros, Psyche and Ariadne; the Muses, Graces, Seasons, and Fates; as well as heroes, including Achilles, Herakles, Theseus, Perseus, and others.

In addition to religious works, Classical artists also produced a range of three-dimensional sporting figures, depicting athletes of various kinds, including discus-throwers, runners, wrestlers and chariot-racers. Curiously, however, historical sculpture as practiced in Egypt and Assyria was almost unheard of in Ancient Greece. Important events were depicted in mythological terms, rather than through factual narrative.

The main characteristics of Classical statuary concerned the accuracy of its anatomy and the realism of its stance. However such improvements did not happen overnight. Thus, in Early Classical Greek Sculpture (c.500-450), sculptors concentrated on making figures that were seen as moving through space, rather than merely standing in it. (A masterpiece of early Classicism is Discobolus (c.450) by Myron.) Next, during the phase of High Classical Greek Sculpture (c.450-400), they applied a Platonic canon of proportions to their figures. The human body was portrayed in an “ideal” form – an idea that was rekindled by Leonardo, Michelangelo and Raphael during the High Renaissance. In addition, High Classical sculptors developed the contrapposto stance, in which the subject’s body weight is shifted onto a single foot, leaving the other slightly bent. An example is Doryphorus (c.440, marble copy in Museo Nazionale, Naples). More natural than previous poses, contrapposto for the first time allowed the influence of gravity to affect the relationship between the subject’s muscles and limbs. Invented by the Greeks, this type of posture was the foundation for European sculpture up until the 20th century. Finally, during the period of Late Classical Greek Sculpture, figures came to be seen as three-dimensional forms, which occupied and enclosed space. They could be viewed from any angle. This late stage of classicism (4th century) also produced the first free-standing female nudes. (Late Classical statuary is exemplified by Aphrodite of Knidos (350-40) by Praxiteles.) Most Famous Greek Statues from the Classical Period

Here is a short list of the greatest sculptures from the Classical era: